The most fascinating thing about this story was these weird icons every few pages, rendered very approximately from memory:

The girl runs, other people run with her or into her, she goes through a door. Then there's another icon, but subtly different. (E.g., with more rings or fewer rings.) As I recall, the girl had no idea what was going on, which was part of the reason for her panic.

The writing was reminiscent of Bradbury's Frost and Fire in its breathless rendition of panic and fear and running (but a very different subject, of course.)

When you get to the story's end, the meaning of these icons becomes shatteringly clear.

Each icon represents a level of an interstellar starship.

I would have read it roughly in the 70's-80's. My memory is that the story was from an anthology of original SF stories. I looked through most of the ~250 anthologies I have here, but failed to find it. I have lost some books to water and rodent damage, so it's possible the story was in one of those.

As I drove to get our Thai takeout food tonight, my brain metaphorically slapped me in the face and said, these icons are "You Are Here" signs.

And I realized that the story title had to be You Are Here ! And that quickly led to this isfdb entry: Alex Eisenstein and Phyllis Eisenstein, “You Are Here” (1977).

I also remembered on that Thai road trip there were two writers, and sure enough, there are.

The publication date matches when I was in grad school haunting the U of I library reading through its large collection of SF. I would have spotted it in the New Books shelf and read it there, which explains why I don't have a copy at home. I didn't buy books I had already read.

I'll get my copy in a couple of weeks, and I'll post the actual icon then.

Well, here it is! 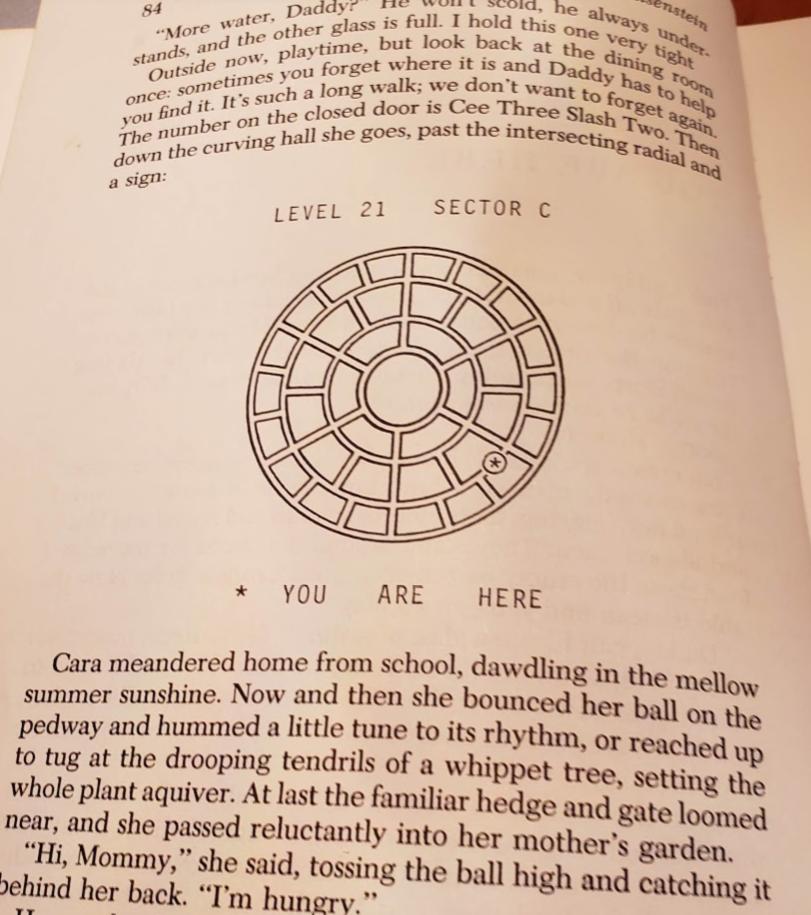 Not too far off from not having seen this for more than forty years.

The book itself has a glued binding so has fallen apart. I'll need to reglue it I suppose. Time to order some padding compound.

Alright. So this might be a wild guess because there's not mant certian indications that this is it. But I still wanted a shot. So it is said that an anime sci-fi film Neo Tokyo's first segment is about an exploration into the maze of a little girl's mind. It is said that the film is inpired by the short novel Meikyū Monogatari of Taku Mayumura.

I couldn't find much information about the novel itself tho. I hope this works.

4
Teen horror book involving a girl and her boyfriend on their way to an abortion being killed by a nightmarish girl with a pitchfork
9
In search of story: Survivor of war game can do no wrong
5
Collection of horror stories: Girl gets cursed, mind-reading ring; man dreams of old woman in tower
20
Looking for Jewish Android Girl Short Story
11
Short story: Young girl living alone on space station about to crash into the Moon
11
Short story about a young psychic man who disrupts a home full of unusual people?
5
I'm looking for a short story/novella about a plague through genetics that infects the world
15
Short story about a sentient disease from a Jovian moon