I read this in the mid '80's or early 1990's. A group of heavily armed elite Earth soldiers is kidnapped just as they were about to be overrun and annihilated. Given the choice of being returned to their certain doom, or taking part in an off world adventure, they get recruited to guard an alien crop from attack from the earlier, less technologicaly advanced bands of soldiers that were captured and recruited to guard the previous seasons of the alien harvest from earlier recruits. Oh yeah. (I think) They ride centaurs.

Jerry Pourelle's Janissaries is a pretty good match allowing that "last season" refers to a long time period (hundreds of years) over which strange orbital mechanics cause a major climatic changes. The unseen aliens who do the kidnapping are interested in a crop that only grows (in quantity? or produces the special sauce? or something) during the time of flux.

The incumbents are "Romans" but are equipped and organized like medieval European knights apparently because the organization from two cycles ago overcame the last set of recruits, but adopted the new technique and technology.

The book is the first of a series. 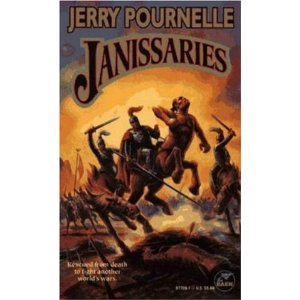 Here is an image of the book cover with a Centuar on it.

Not the answer you're looking for? Browse other questions tagged story-identification novel jerry-pournelle or ask your own question.