I have strong memories of this book from my childhood, which would have been mid to late 70's I guess, which are just images mainly. I think that I got it from my school library, so it is likely to have been published around the late 60's, early 70's. There were pictures in the book, but I think it was more a paperback with pen and ink drawings than a younger child's picture book. This is a weak memory though as it could be that the pictures were in my imagination. The book would have been written in English and was read in the UK.

The story is set in a future where animals can now talk. The main protagonist is (I think) a penguin who lives in a giant clam shell which is his house, or maybe just his room. There are humans, but eating animals is now relegated to the history books. There are a couple of humans who find a butchers knife in a museum (maybe?) and hatch a plan to use it to kill and eat an animal.

Could it be "Urmel fliegt ins All" by Max Kruse? (English title: The Urmal in Space)

Released in the original German in 1970, it's the third in a series of children's books about the "Urmel" creature whose name was translated as "Impy" for the 2006 international movie release based on the first book. I have been able to confirm an English release in 1973 via worldcat.

The stories features multiple talking animals, although they're able to talk because the character Professor Tibatong has developed a drug that gives them human intelligence. One of these animals is a penguin named Ping who lives in a giant clam shell on the beach of the island all the main characters reside on.

In this specific part of the series the professor and most of his animals travel to a secret sister planet of Earth which is technologically more advanced, human races are now divided into "heads" (scientifically progressive with weak bodies) and "bellies" (descendants of the super-rich who do nothing but indulge in their fortune) and where eating animals is relegated to history books, most domesticated animals having become rare and only existing in zoos. The villains of the story are three "bellies" who hear of the animals arriving from Earth and want to experience the sensation of eating meat they read about in historical descriptions of feasts. They do find a museum piece, although it's a whole automatic butchering machine rather than a knife and they try and fail to capture and eat the animals, chief among them a pig (the sow Wutz, who is a bit of a motherly figure) and the titular Urmel/Impy.

The team rescuing them includes the Professor and his boy helper, the other animals, a "head" who brought them to the planet in the first place and the daughter of the villains. As far as I can remember there wasn't any married couple, although Wutz is the Professor's housekeeper and can have a wife-like nagging but caring attitude. The book series does contain a married couple, but they're not really part of this book's story. 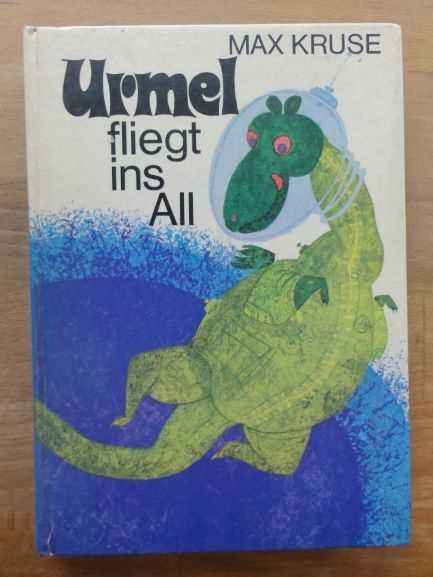 7
Children's book where the hills are actually a giant laying down and witches are common
10
Book about a planet where DNA swapping between animals humans and metal eating microbes published in 1995 or earlier
10
Short Story about a boy and a dog, where all animals can talk
11
Children's Book Involving Witches, Flying Cars, and a Mysterious man who sacrifices himself for the protagonist
8
50's-70's sci-fi children's book set in outer space, with an alien spider and needles to go into deep sleep
7
Child's picture book; fantasy story with a green lizard in human clothes
10
Book/book series set in the future about an elite academy, a great inventor, a time-travel machine, and a brother and sister
7
Children's book (possibly short story) with a "spongy" remote control that affects people
5
Batman comic where Robin is shot in the chest with Penguin's umbrella and Batman is forced to tie the two of them to a tree during a storm
21
Help identifying movie where a virus sent from the future is encoded with a message