I don't exactly know the name of this anime/cartoon so here I am describing it.

It was aired in 2002 on TV. The story contained mainly an alien invasion and a force of power armor guys who fight the alien. The main guy rode on a surf board type of thing while he was launched from a truck which has catapults to launch people. The fight ended then with the force divided in 2 groups who fight for ultimate power. There was something called Giam which was in 2 pieces and the one who combined it get a lot of much power in his suit.

The suit the main guy is using is blue and white, and the gun he use while fighting is some sort of laser beam type. I also remember one word from end credits and it was like 'm-divers' or 'm-drivers' or something like that.

I assume the series has more than 2 or 3 seasons and also the total span is nearly 70 to 80 episodes. I watched in Hindi(India), but I think it was a US or Japanese origin story.

If anyone knows about the show please give the name; I have been searching for it for the last 6 months.

I'm wondering if this is Get Ride AMDriver. 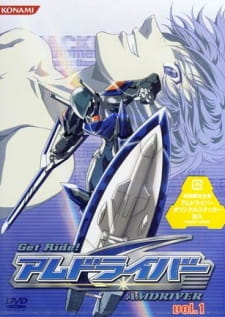 It's a little late (2004), but it aired in India, and sounds like "m-driver". The main character's suit is blue and white.

In the future, human beings are attacked by beings called the Bug-chine, which appeared a few years back. No normal human weapon can defeat the Bug-chine, but there is hope. It is the AMDrivers that will save the earth. They are solders using the latest "AM Technology". With overwhelming power, they will beat the Bug-chine one after another and become heroes, as well as capture the hearts of their fans.

Possibly re the combining into something more powerful, or else the idea of catapulting off of a truck:

Episode 5 introduces the Binary Silhouette Armor, "Bisar" for short, which is a series of vehicles (motorbike, giant floating board, glider, etc.) that the AM Drivers can use & even combine with to create new forms

Re the team splitting up:

The star of the idol-like TV show is revealed to be the bad guy, and a very competent one to boot who almost manages to win. The original "bad guys" end up helping the heroes in defeating him. 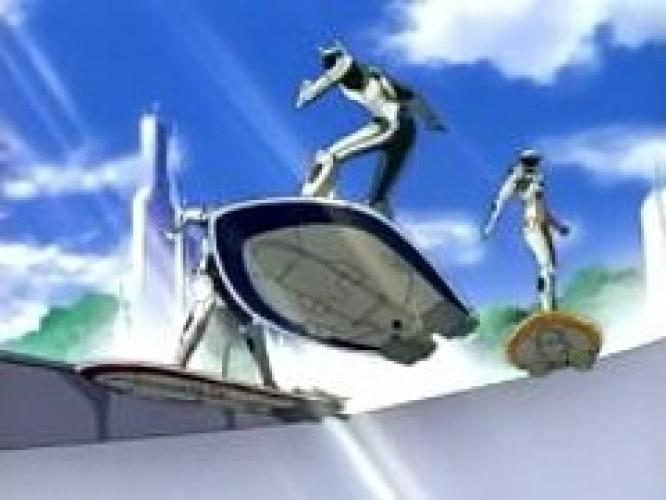 Could you be thinking of Eureka Seven. I haven't seen it, but I am aware of it because of Mechasuits riding surfboards.

5
Woman falls in love with alien who helps her fight the invasion
10
Identify a Sci Fi cartoon where they had space suits and would fight in outer space
0
Searching for the name of a cartoon which was broadcast on Cartoon Network (India) between 1999 and 2003
6
Anime/cartoon about various gems giving powers to their holder
16
Story ID: Alien invasion involving tripod-style walkers, force fields and a human resistance force
2
Anime movie, police special unit, fights demons with huge guns that cast/fire spells
7
Comic character from the 90s who resembled Spawn
8
Novel with space suits made of strange material, disruptor knives that melt people, and nonhuman characters
10
Video game with alien bio armor
9
Hindi TV series with angry ghost developing affection for single mother and her kids