I have an extremely broken recollection of a horror movie I've watched many years ago. I watched a Russian dub of that film. I'm subscribed to a TV provider known as Kartina TV, and one of the services that it provides is Russian dubs of films that were originally in some other language. I have no idea what the original language of that film was.

A group of people for some reason travel to an abandoned monastery or insane asylum (I don't remember which one it was). After a while, one or more of the visitors stumble across a room where they learn that, before it was closed, the place was used for experiments on humans where the patients were injected with some toxin from some fly, with the goal of "Transforming the brain into a sort of reproductive organ" (That's the wording that the dub I watched used, the wording in the original film might be different), but which resulted in them becoming monstrous creatures. After that, one of the patients, patient one, appears and attempts to subject one of the characters to the procedure.

I did some searching on my own after asking this question, and I am now almost certain that the movie which I was remembering is Hidden 3D, made in 2011 and directed by Antoine Thomas. 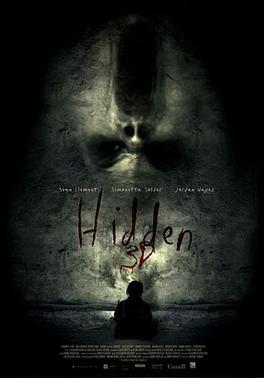 A man inherits a remote monastery-turned-experimental addiction treatment center from his late mother, and makes a horrible discovery while exploring the property with a group of friends. Brian Karter (Sean Clement) was just a young boy when his mother treated addicts at "The Sanctuary". Years later, Brian's mother has passed away, and the abandoned building becomes a monument to decay. Brian wants nothing to do with it, but his friends convince him to take a tour of the building before deciding what to do with it. When Brian and his friends stumble into a secret laboratory with a cutting edge machine capable of eradicating any form of addiction, the discovery leaves them speechless. But with each successful treatment, a new nightmare is born. Now, after decades lying dormant, the nightmares have awoken.

The film review found here is definitely referring to the parts of the movie which I can remember: https://horrornews.net/35164/film-review-hidden-3d-2011/

I also searched and found the Russian transcript of the scene which I remembered: http://cinematext.ru/movie/zataivshiesja-3d-hidden-3d-2011/ . It even has the exact "Transforming the brain into a sort of reproductive organ" dialogue which I remember.

15
Old movie with abandoned spaceship and skull in helmet
7
Old horror movie with mutated ape-like people
1
Help identify Animated Fantasy TV Series
8
What animated movie had reptilian aliens attacking a city surrounded by a force field?
12
TV series (or possibly a movie) where people needed their medicine injected into their wrists
7
Horror ghost movie with people trapped in a house
11
Animated film about a society's offering for gods
16
Horror movie in a subway