Ask Question
Asked 2 months ago
Active 2 months ago
Viewed 172 times
10
This question already has an answer here:
Teenagers find an ancient lizard creature in stasis and accompany him on adventures to an undersea city (1 answer)
Closed 3 months ago.

I remember reading this ca. 1974. It was a YA novel in English that I got from my school library. They had a mass-market paperback copy. Unfortunately my memory is extremely sketchy, since it was a long time ago, and I was a little kid.

I remember two main things in the book that excited my imagination:

Maybe Stranger from the Depths (1967) by Gerry Turner. 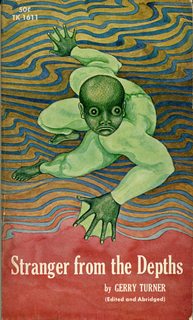 They traveled between their cities with an underground vehicle. (I can't remember if it was like a subway or a digging machine)

They used synthetic diamonds in much of their construction, for example the dome over the city, and a small (one foot?) statue of a lizard man.

The story begins with a group of teens/young adults finding a diamond lizard statue after an earthquake. Later, exploring the area, they wake up a lizard man from stasis pod. He had been in there a VERY long time. He leads them to his city, but it's deserted so they travel to another city trying to find answers.

I have not read it, but in Wikipedia's description, a miner named David Innes has an experimental excavating vehicle called an "iron mole".

There is a problem with the vehicle and they end up burrowing 500 miles into the Earth's crust and discover a land underneath -- a kind of hollow Earth -- called Pellucidar.

It has several different kinds of creatures, including the Mahars, which are intelligent flying reptiles.

15
What novel has people exploring a spaceship with cubbies that duplicated anything, including a hand?
6
Sci-fi novel about a world-destroying cataclysm from the 70s or earlier
7
90's (or earlier) post-apocalyptic teen novel with lizards hatching from eggs and disfiguring the faces of people they bite
16
80's Novel that has long-lived people and gyroscopes
8
Novel with space suits made of strange material, disruptor knives that melt people, and nonhuman characters
7
Late '70s / early '80s Comic With Lizard and Woman in Wasteland?
5
90s TV Show about a school boy who discovers that people turn into lizard kind
10
Sci-fi novel with lizard people running the government
5
70s YA novel about two boys travelling millions of years into the past, meeting a “cynogasaurus” and rival animal-themed caveman tribes