I was singing in the shower holding a near empty bottle of shampoo when I felt the vibrations on the bottle. Having a dumb moment I thought to myself "If only Daredevil could see vibrations, then it would be as though he could hear..." Then I realised I had it the wrong way round.

But another, less stupid thought popped into my head: "Can he feel/hear radiation pressure?"

Photons exert a pressure (however minute) on whatever they strike, so instead of waves of sound pressure causing a visual stimulus, a wave of radiation pressure would give an aural stimulus. It would however be very 'dim', as radiation pressure from a million red photons would be no more than 4.2 yoctopascals (10-24).

Is this possible for him? <joke> Or should I go pitch this idea?</joke>

Daredevil is a walking Geiger counter.

By the man's own admission.

In Daredevil #43 (1968), after Karen Page decides to walk away from him, a heartbroken Daredevil begins to storm the city, looking for a bad guy to lash out on. He first settles on beating up the Jester, but intercepts a radio call announcing the theft of radioactive vials.

He then proceeds to use his "hyper-keen senses", which make him a "walking Geiger counter", in order to "sniff the thief out". Indeed, upon approaching the villain, Matt feels "a strange, burning sensation". 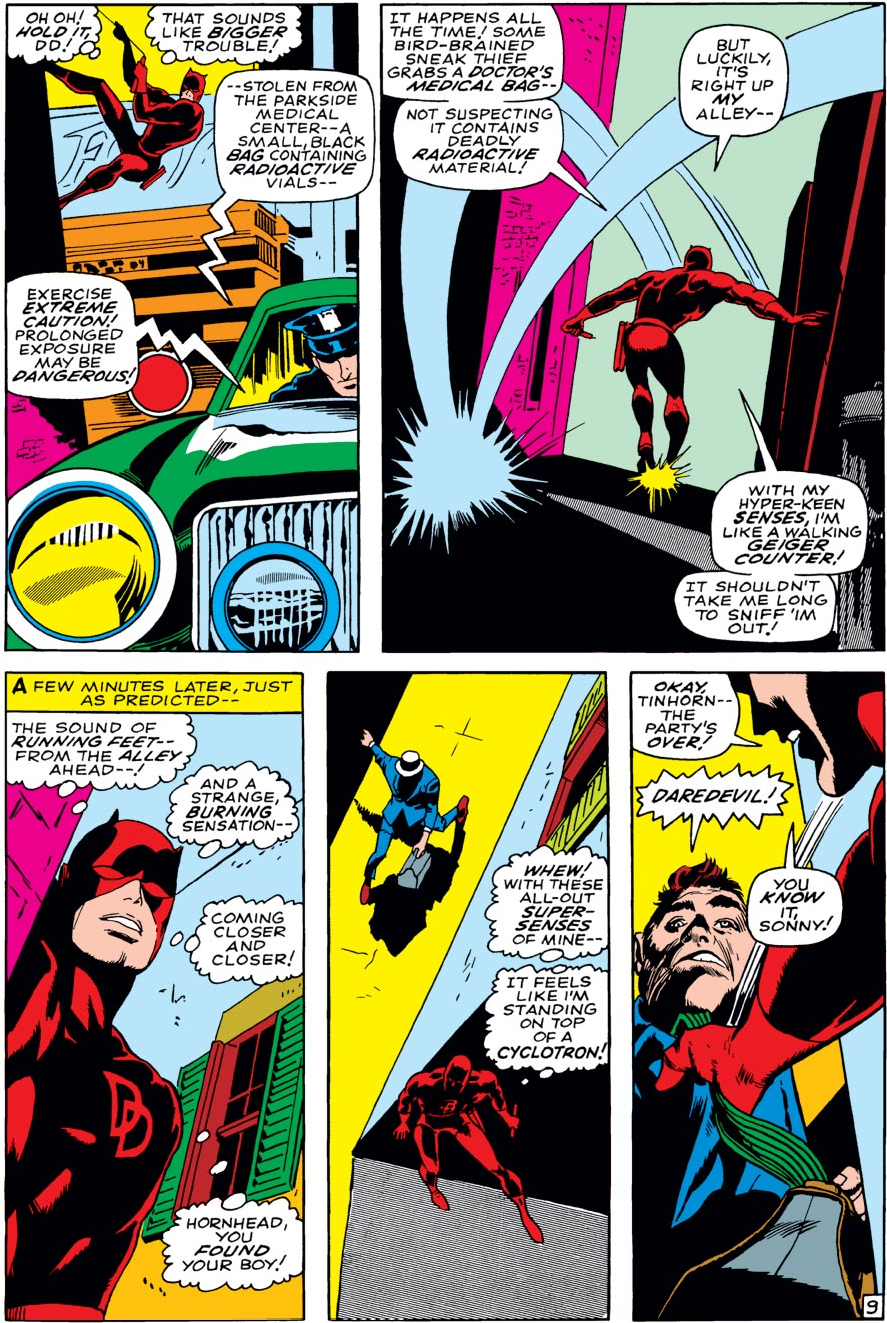 This radiation affects him very quickly, and later driving him a tad bit mad, going up in a boxing match against Captain America. Daredevil suspects it has to do with the accident that made him blind, namely his eyes being spread with radioactive material fallen from a truck. 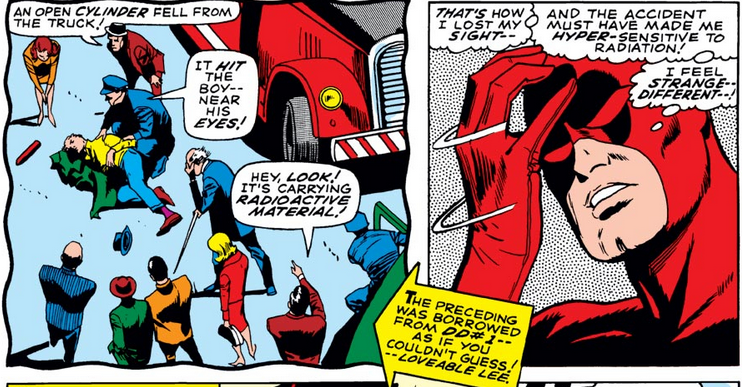 As to how exactly he detects the radioactive material, it's not precised if it's the radiation waves, the pressure... But to be perfectly honest, I think 60s comic book writers were even more clueless about radioactivity properties than I am.

He can also identify radioactive heat

In Daredevil #1 (2014), while helping out some forensics in a kidnapping matter, Matt Murdock is able to detect a particular warmth coming from a piece of paper, and identifies it as "a minute level of residual radioactivity". Not really radiation pressure, but still a defining radiation characteristic.

And of course, usual comic book rules apply. Daredevil can hear a heartbeat over an early-2000s cellphone (Daredevil #38, 2002), he can read a newspaper due to how the ink feels under his fingers (lots of instances), he can anticipate a phone call (Daredevil #184, 1982)...

So, if the writers need him to be able to feel radiation pressure, he'll be able to do that.

According to his bio, Daredevil's powers are extraordinary but without being too unrealistic (such as Superman's):

Short answer: No, such an ability would be far too unrealistic.

Not the answer you're looking for? Browse other questions tagged comics marvel science daredevil or ask your own question.

5
Book (pre 1982) - recalled mercenary only survivor of radiation weapon
6
What did Murdock put in his coffin water bed?
32
How true to the comics are Matt Murdock's powers in the 2015 Daredevil TV show?
7
How did Matt Murdock learn to fight (2015 show)?
8
How did Stick find the young Matt Murdock?
6
How can Matt Murdock read something that isn't written in Braille?
4
Have Matt Murdock and Jennifer Walters ever appeared in court together?
3
Does Wilson Fisk discover that Matt Murdock is Daredevil?
6
Has Matt Murdock ever tried to pass as sighted?
5
Is Matt Murdock's Daredevil persona still public knowledge in the comics?