Is T'Challa still recognized as the Black Panther at the end of Avengers: The Thanos Cabal?

Being posted in reference to Chadwick Boseman's most influential role.

In The Thanos Cabal: Avengers/New Avengers Vol 12 , our heroes within the Illuminati are presented with a dire choice: use a bomb to essentially destroy a counter earth with the equivalent number of lives on it, or let the 616 earth be destroyed. Tony stark, Reed Richards, Dr. Strange and T'Challa are all in this fight, and debate the merits of triggering the planet-buster bomb. coming down to it, it is T'Challa who volunteers to do the dark deed....however, uncharacteristically, he hesitates.

T'Challa is met by all of his preceding ancestors who were the Black Panther, including his father, T'Chaka, and they push him to pull the trigger and kill billions, even knowing it is morally wrong.

This is not an evil threat, but a world of innocent of people on a collision course with our own, and all of his ancestors essentially have no problem telling him to wipe out world 2 to protect his own earth, and by extension protect Wakanda, which is his duty. T'Challa responds that it is wrong, and he cannot do it, to which T'Chaka responds he is banished from the afterlife, has no people, and is no Black Panther... 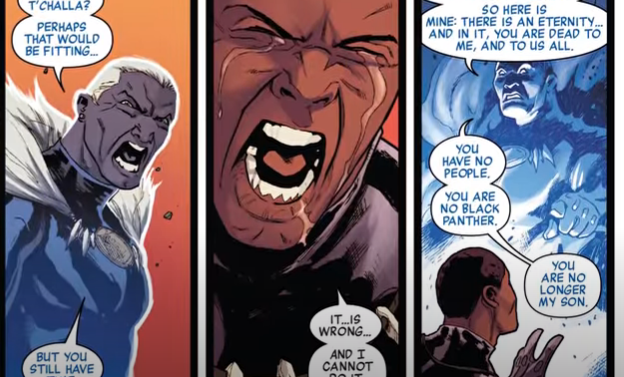 Central Question: Did this affect T'challa's official rule? As he was the only one who heard this "banishment", did it effect how his people saw him, i.e. was he still regarded as their king? Or did he step down from the thrown?

Did the Panther God Baksh condone this action and strip T'Challa of his powers?

Browse other questions tagged marvel continuity black-panther or ask your own question.