Is it possible to identify the wands in the Wizarding World logo? 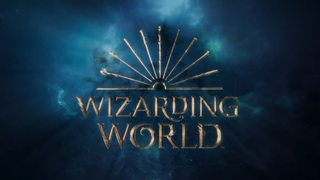 The middle wand seems to be the Elder Wand. Is it possible to identify the other wands (as in who are their owners)?

Wizarding World themselves have answered this in the announcement of the new logo.

The new Wizarding World logo is an open book, reflecting its literary origins, and contains elements emblematic of the beloved characters from both Harry Potter and Fantastic Beasts. Astute fans will instantly notice the iconic lightning bolt, as well as a subtle nod to magical creatures, embedded in the logo. Additionally, the book’s fanned-open ‘pages’ are actually wands, each belonging to one of the legendary wizards or witches from the two franchises.

The order of the wands is also symbolic: reflecting the evolution of the films, they begin with those chosen for the Harry Potter characters, followed by key characters from Fantastic Beasts. From left to right, they are the wands belonging to Voldemort, Ron Weasley, Hermione Granger, Harry Potter, Albus Dumbledore (the Elder Wand), Newt Scamander, Tina Goldstein, Queenie Goldstein, and Gellert Grindelwald (the wand he possessed before claiming the Elder Wand).

All of the wands point inward, inviting both devoted and new fans, as well as future generations, to discover more of the magic and adventure of the Wizarding World.

Note that the bottom horizontal lines that make up the cover of the book and join at the spine aren’t wands but just that, lines to show the cover.

Not to take the fun out of it completely, here's a comparison of all the wands:

Not the answer you're looking for? Browse other questions tagged harry-potter object-identification pottermore or ask your own question.

11
How Important is Money in the Wizarding World?
9
Would the Elder Wand choose every new owner who wins?
19
How does a wand choose its new owner if the wand was created for the owner?
12
Was the 'first' wizarding war with Voldemort really the first ever wizarding war?
6
Does any other wand share the same core as the Elder Wand?
7
How many people recognized that Dumbledore owned the Elder Wand?
3
What wizards and witches owned wands made of elder wood (besides the Elder Wand)?
8
What is the bio-hazard with an eye symbol on Moody's pocket watch?
9
Why does Hermione claim that all wands are equal, save for the Elder Wand?