The only way to defeat the hallucinations was to use the same methods that worked when they were kids.

I read this before 1990, in a short story magazine.

This is Ghost Five, by Robert Sheckley. The gas was dubbed "Longstead 42" and made real one's childish terrors.

A little known trivia is that this story was one of the two (both by Sheckley) used as "inspirations" by the Italian cartoonist Bonvi to draw an anthology of humour comic stories called "Storie dello Spazio Profondo" (Tales from Deep Space). Most of the screenplay was written by the Italian singer Francesco Guccini, but he wasn't available for two of the stories, so Bonvi helped himself from two of his favourites.

This is the last scene from "Bonifica Spaziale" ("Space Decontamination"), the story of the question (the planet is called Specter Three instead of Ghost Five), with its conclusion: "Nothing works like a good blanket over your head to defend yourself!". 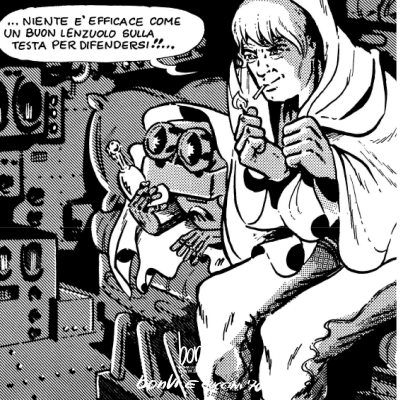 12
Exploration teams land on planet and die of nightmares

4
1960s short story, aliens accidentally set fire to the field they land in
12
Exploration teams land on planet and die of nightmares
16
Short story where advanced civilization doesn't understand their technology
10
Short story about intelligent trees who control humans on an alien planet
13
Story identification - “bless the beasts that bless us”
11
Science fiction short story where explorers land on planet inhabited by humanoids who eat algae
13
Short story about a sociopath funeral director on a planet where goo makes birds sick
7
Short story with explorers or tourists on a planet with dangerous, but attractive glass plants