I'm searching for an anime (Japanese-style animation) movie/series (although it felt more like a feature film), that I remember watching a portion of before 2006 (Most likely watched it on mainstream television in 2005 or 2004).

I'm unsure whether it was dubbed or not. I think it was a relatively modern anime (appeared to use computer-based shading and dynamic lighting effects (and CGI)). In the small segment that I remember, a Woman/Girl is bitten on the finger (or hand) by a small creature, and her finger begins to bleed (I think there was a shot focusing on the blood slowly forming a pool on her finger). The woman was either holding the creature at the time, or had reached out to pet it, and had ended up being bitten. I think that the creature jumps and remains on the shoulder of the woman after they become friendly with one another. The particular setting of this scene was on a habitable planet (Unaware if it was earth), in the daytime with a blue sky and some clouds. In the background of the scene, were tall structures, possibly wind turbines. I think the genre was science fantasy and magic may have been an in-universe occurrence ( I think the woman themselves was a magic user).

-Similar to design of Filli from Deltora Quest anime

-Reminiscent of the design of non-evolved Digimon monsters (first series)

(EDIT: Having now watched Nausicaa in response to McTroopers answer, I was surprised at how similar it was to my description, however it didn't seem to be what I was searching for. I think the Woman had larger eyes than Princess Nausicaa, a size more in line with 90's or 00's era anime. Nausicaa, although this might be influenced by my own rose-tinted glasses, seemed to have a more muted colour aesthetic than the anime I remember (it seeming to have brightness/lighting only achievable by computer-based shading et cetera))

Sounds like a scene from Nausicaa of the Valley of the Wind, one of the first animated movies by Myazaki.
Of course it is not very recent (early 80s) and I don't think it featured any CGI, even if the drawings and animations were of very good quality for the period.

The scene you saw happened at the beginning of the movie: the animal is a fox-squirrel (that had been found by a friend of Nausicaa's), who bites Nausicaa beacuse it is frightened. She doesn't react to the bite in order for it to calm itself, then began friend with her. 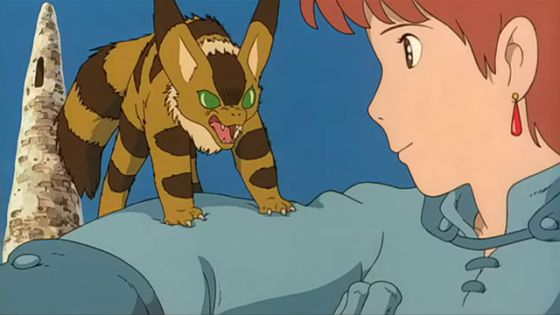 The setting is a post-apocalyptic future, which features huge ruins of the previous era, and also wind mills built by the survivors 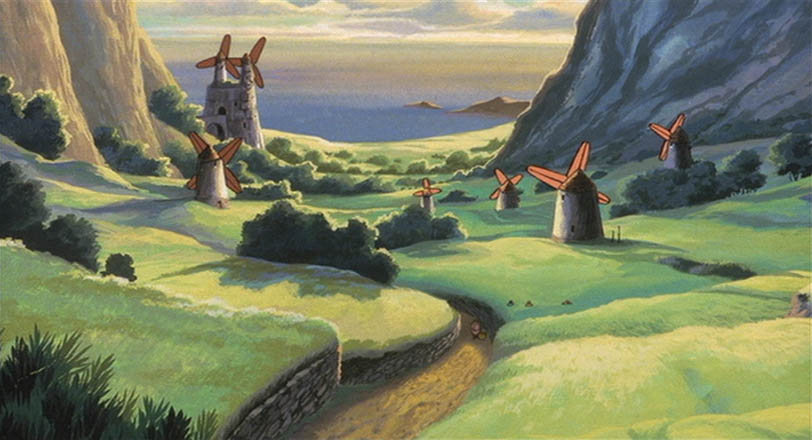 10
Japanese movie with girl who goes boom at the end
3
Anime about people merging their bodies through the power of love with the help of gems
10
Anime about boy & summoning monsters
5
Space Anime with super large spaceship, lonely cube AI and young girl crowned as its queen!
4
Alien invasion happened and humanity made powered armor suits to fight
1
Cartoon show with a blonde boy in a white shirt who found a necklace in a vase with which he can summon a creature
3
Anime with character that goes to a magic academy
8
Anime like "The Old Guard" involving a small number of immortals being hunted for the secret of their immortality
5
TV kids show where there was a black and orange character looking bird
7
Fantasy anime involving a god named Paladin