Whose symbol is on this Marvel belt?

I was gifted this magnificent belt that features the logo of several Marvel characters, specifically members of the Avengers. From top to bottom: Nick Fury/S.H.I.E.L.D., Hulk, Iron Man, Thor, unknown, Captain America, Hawkeye, and Black Widow. My question is: what character is represented by the image between Thor and Captain America? I think that it could be Scarlet Witch or Falcon, my brother thinks that it's Ant-Man. Who is it? 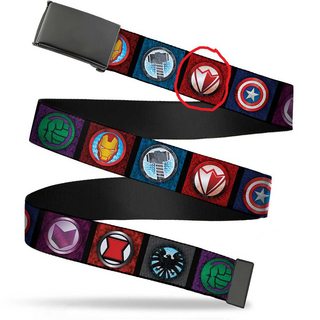 Based upon the results of a few Google searches, that symbol appears to be one of several used for Falcon. See "New Disney Cast Member Pin" (the same pin also is offered at a pin trading database); also see (less authoritatively) the MCU Wiki and, oddly, animal information site Animalia Life.

Here's a screenshot of the first linked webpage, in case it ceases to exist.

2
Who are the characters in the Marvel Universe Wiki background?
8
What Marvel movies foreshadow Avengers: Age of Ultron?
10
Which MCU characters are shown to be worthy of Mjolnir in the comics?
10
Is the film line up of The Avengers taken from the comics?
54
Who are these Lego superheroes?
27
What did the Scarlet Witch show the Hulk/Bruce Banner?
12
Is there an objective answer to who "the strongest Avenger" is?
10
Can you please identify these Marvel characters?
6
Which Marvel characters are represented on this t-shirt?