DUNE takes place near the north pole of Arrakis – why no midnight sun?

I just finished Dune. the majority of the novel takes place near the north pole of Arrakis. Arrakis’ sun, however, rises and sets in a way typical of Earth’s more temperate latitudes without any effects you have on Earth. for example, I have visited the English–Scottish border (I forget what time of year) and the sun did not exactly set but hung on the horizon. Further north (or south), day or night could last for a month.

Could Arrakis just have the kind of orbit where that could happen? I don’t know much about orbital mechanics so I couldn’t work it out myself.

Please try to spoiler-protect spoilers as, so far, I have only read the first novel. (I don’t intend to read the Brian Herbert–Anderson prequels or sequels, though.)

If you are willing to accept the expanded Dune universe, it's slightly addressed, but I don't think Frank Herbert ever actually addressed it in the original novels.

In House Corrino by Brian Herbert and Kevin J. Anderson, however, you get the following:

The axis of spin for the planet Arrakis is at right angles to the radius of its orbit. The world itself is not a globe, but more a spinning top somewhat fat at the equator and concave toward the poles. There is a sense that this may be artificial, the product of some ancient artifice.

—Report of the Third Imperial Commission on Arrakis

Frank Herbert put a lot of work into studying culture and society, and even quite a bit of biology, but I don't think he thought a lot about orbital mechanics; that said, if you take the expanded works into account (and the above quote), with no axial tilt, you could indeed have day and night, as long as you were even slightly away from the pole. Add in the fact that the map we all know from the book was drawn by a cartographer, but from a map sketched by Herbert (thus making the distances a bit questionable), and it suggests most of the locations in the stories were far enough away from the pole to have more normal day and night. 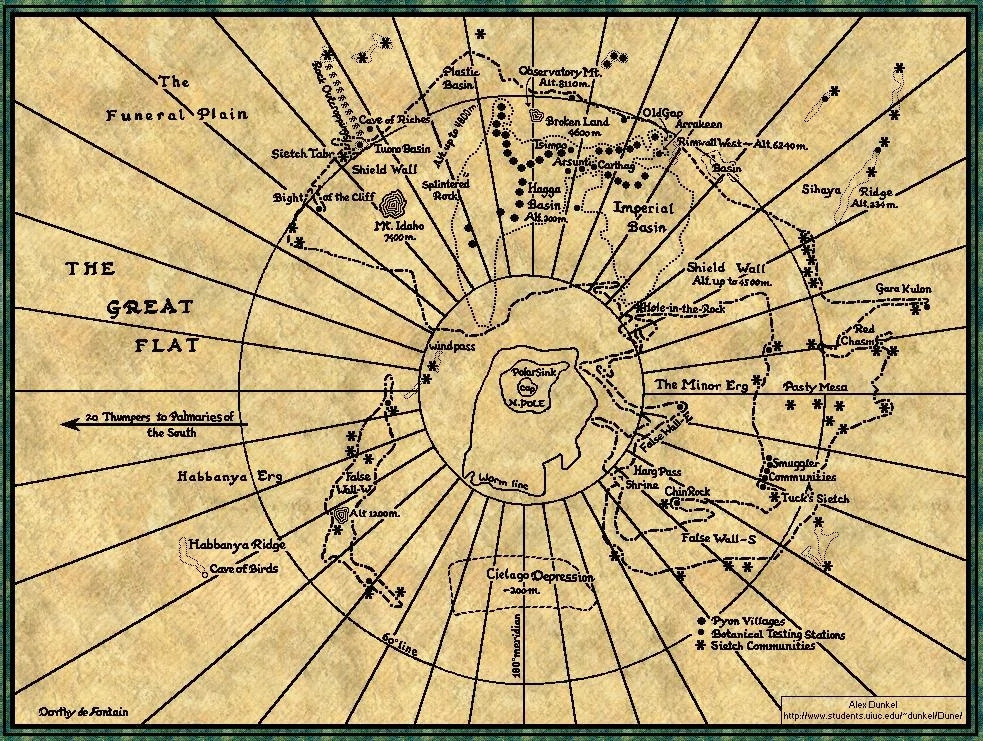 Per secondhand information, this data is supposed to have been confirmed by Kevin Herbert and Brian Anderson as having come from Frank Herbert's notes.

(Incidentally, this is supported by the contents of the The Dune Encyclopedia which indicates that it has a the axis of rotation almost perpendicular to its ecliptic plane, but it then goes on to mention the impact of other planets in the system giving it an eccentric orbit (and strange, severe season, with a year lasting from 295 to 595 days), and the moons giving it an eccentric rotation and thus a very inconsistent length of day -- averaging 22.4 hours, but ranging from 3.8 to 51.4 hours each. [I don't recall either of these elements in the stories, and they seem like the kind of things that would have come up; honestly -- I'd expect them in Yueh's briefing near the beginning.])

That said, items in The Dune Encyclopedia are contradicted by Heretics of Dune and Chapterhouse Dune, so it may not be the best source. Herbert himself says, in the forward: "As the first 'Dune fan,' I give this encyclopedia my delighted approval, although I hold my own counsel on some of the issues still to be explored as the Chronicles unfold.")

There are some other inconsistencies; for example, in Dune Messiah, in which Scytale is in Arrakeen, we see:

It was the proper hour, though. The pale sun stood almost directly overhead. People of this quarter remained sealed in their houses to sleep through the hot part of the day.

Based on the map, and the position of Arrakeen (on the 60° line), that shouldn't be possible, even allowing for the zero axial tilt; it would still be about 30 degrees off of directly overhead -- well within the range of what he would have noticed. (60° is close to the edge of the arctic circle on earth, by comparison.) It's possible, however, that this is his perception, not reality.

All that said, there are quite a few small inconsistencies in the Dune books (even in the first one, look at Farok and his arm, identified as missing.. but then he clasps his hands together, or things Duncan remembers that would have occurred after he died defending Paul; there are a lot of small issues like these.) I prefer to think of them as historical works that have inaccuracies creep into them over time, much like the quotes or information at the start of the chapters, in effect, coming from a slightly unreliable narrator.

Astronomers define axial tilt as how far the planet's axis of rotation is from being exactly 90 degrees (a right angle) from the plane in which the planet orbits around its star.

The axial tilts of other planets in our solar system range from Mercury's 0.03 degrees to Uranus's 82.23 degrees.

So the examples of the axial tilts of planets in our solar system shows that it is clearly possible for a planet to have an axial tilt so low that it would not experience any seasons or any significant seasonal changes in the lengths of day and night. Every latitude on the planet would experience days and nights each lasting almost exactly half of a planetary rotation period, all year around.

So if the planet Arrakis has an axial tilt close to zero degrees, people would not notice a midnight sun in summer or a noontime darkness in winter, even near the poles of the planet.

26
Why not settle near the polar caps?
4
What is the solution to the problem of Delta Pavonis and Fomalhaut being seen in the sky of Dune?

61
Why doesn't the Emperor control Dune (Arrakis) himself?
32
Why did the emperor send the Atreides to Arrakis, then the Sardaukar to remove them?
13
How could Reverend Mother Gaius Helen Mohiam be the ((great)grand)mother of people with other/genetic memories, but nobody remembers hers?
22
Did the big smuggling outfits operate interstellar vessels that were not controlled by the Spacing Guild?
13
Why do family atomics exist at all in the Dune universe?
26
Why not settle near the polar caps?
17
Is there canonical evidence in the first 6 books that Dune takes place in 10191?
13
Why don't the sandworms attack outworlder cities in Arrakis?