So, I was flipping through broadcast last night, and I caught just a couple of brief glimpses of a B action flick on a lesser channel.

I would guess it to be 80s/90s in time period. The protagonist seemed to be a hard-bitten, modern soldier-of-fortune in a beret --he looked like Dolph Lundgren, but I'm not sure it was him. In one scene he shares a cigarette with a young man of indeterminate "exotic" origin.

In another scene, he and a character who looked like John Denver, and whom I'm just going to guess was an archaeologist, were held prisoner by some vaguely Egyptian-looking guards with spears that shot out energy bolts, in front of an androgynous young ruler/cult-leader, and a retinue of boy priests. There was some kind of tussle, and everyone got zapped with the energy spears. Then the ruler's eyes started glowing.

That's all I saw of it --can anyone identify it?

Since we don't seem to have a high-quality answer for this, I'm going to post that this is almost certainly the 1994 movie Stargate. After an alien ring is discovered in the desert, it is activated to reach a distant alien (also desert) world, where conflict arises when the alien rulers return.

The movie has a strong Egyptian aesthetic; the gate is discovered in Egypt, the alien and its retinue favour Egyptian themes (and may be the originators of them on Earth) and even the pyramids are explained as the landing pads for the alien spaceships.

As for the scenes you remember, here are Kurt Russell (in a beret) and James Spader: 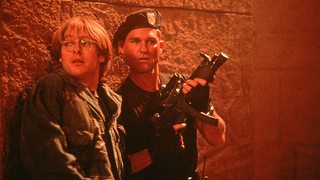 Here is Ra (centre, in helmet), some of his retinue, and his guards (wearing their helmets, armed with energy staves):

The young man of "indeterminate origin" is named Skaara and took to the Earth soldiers and was partly accepted by them: 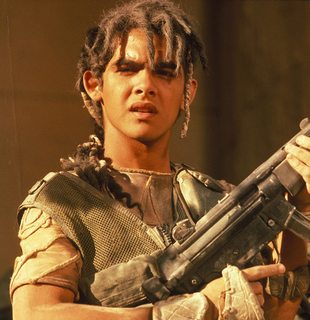 The alien Ra does have an androgynous appearance: 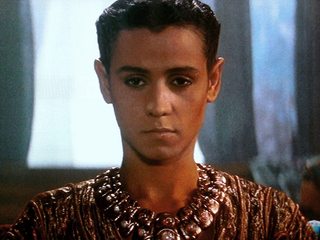 Not the answer you're looking for? Browse other questions tagged story-identification b-movies or ask your own question.

15
Please help identify B-Movie with Earth turned into penitentiary
5
60s or 70s made-for TV sci-fi movie with brain washing and Japanese agents
9
Looking for a sci-fi comic about a female soldier of fortune
4
'80s kids movie with 3 orbs in a house, and one is evil
6
Probably an '80s B-movie with a blond boy and an old man, who has to decide whether to stay or go with aliens
3
80s or 90s movie with evil genie and kids?
5
Old B movie with shapeshifting alien
10
'80s movie with gold female alien