It was hardback with a blue cover with white mountains.

The main characters were small people like hobbits. I think one's name was Bin or Bik or Bek. They could communicate somehow with wolves, one was named Skie. They find a Conjuror named Kel who has broken his leg. He seems to be fleeing from some enemies.

That's as much as I remember. None of my school friends remember this book.

I think this is Jane Louise Curry's The Wolves of Aam.

The Tiddi do have the eponymous wolf companions. At some point, a conjuror named Lek is introduced. He is the main character in the sequel book. According to goodreads, this duology is part of a larger series.

One of the older covers: 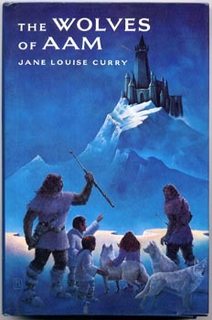 A better summary than I have found anywhere else is on the author's site:

For the first time since the days of legend, Men and giants are abroad in Astarlind, the country of the Tiddi nomads-- a shy folk, smaller and older than the race of Men. Great wolves called the "Dread Ones" walk again, and on their backs ride terrible riders unknown in the old tales of the Times Before. All this and more Runner, the swiftest of the Tiddi scouts, discovers when he falls in with Lek, the conjuror, a meeting of ill chance-- or perhaps good fortune in disguise. It is through Lek that the evil Lord Naghar's henchmen learn of Runner's lucky "dreamstone," now missing. Is it truly the fabled skystone Mirelidar of Lek's tale? And why should Lord Naghar desire it so?

To search for the stone and an answer, Runner-- with his Tiddi friends Fith and Cat and help from two of the huge Ice Folk and the elusive, magical Wolves of Aam-- brave the northern Ice-lands and penetrate the grim mountain fortress of Gzel. There, in a night of terror and destruction beyond imagining, that part of the answer is given, part of the riddle is solved. This ancient world, filled with brooding mystery, danger and forces of power, is peopled with individuals, both human and magical, who cast their own spell and draw the reader on with mounting suspense to a fateful conclusion.