See dafont. It doesn't have the ligature version. Only the standard and Droid version, plus a few others. 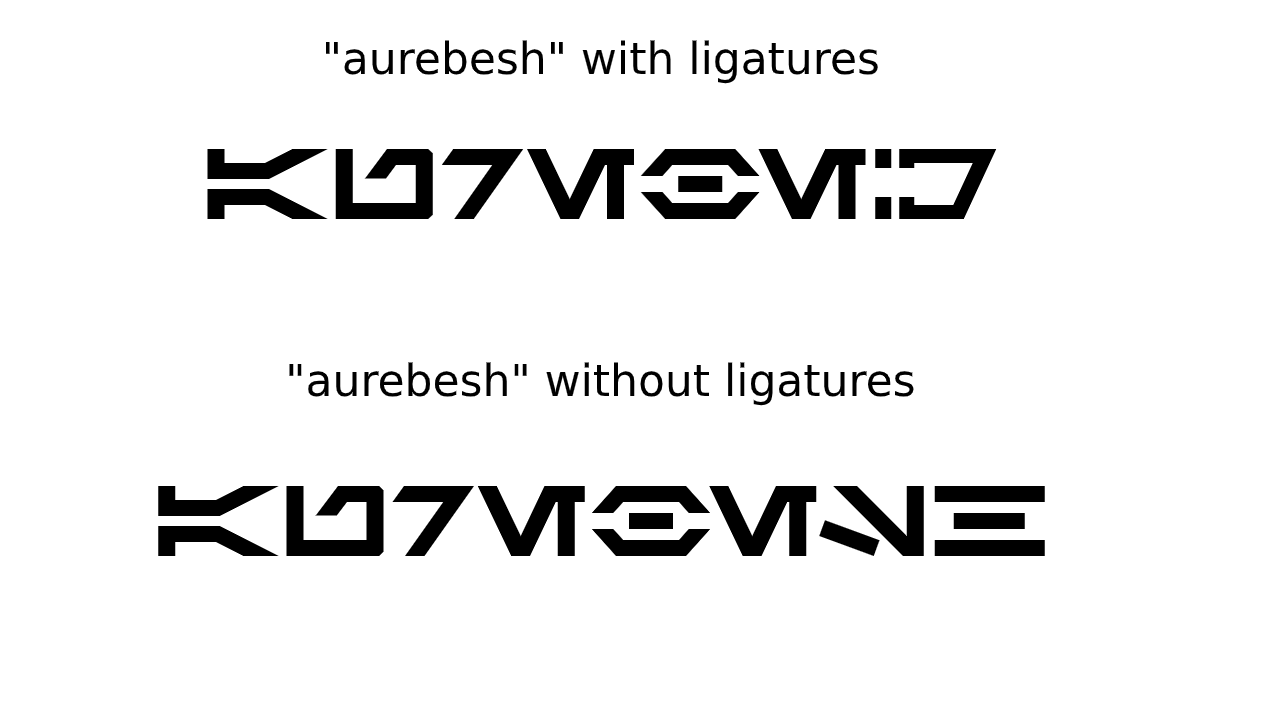 The short answer is that Stephen Crane of West End Games more or less invented the canonical Aurebesh, which has a few variants in-universe, as character sets tend to do. There is no official Aurebesh font as far as I can tell, although there are a lot of fan versions, including some that do do ligatures, or account for ASCII characters not canonical to the Star Wars universe.

Aurebesh Droid is an unofficial alphabet designed by Stormtrooper on Weekends, possibly based on the style sometimes called Droidobesh, as seen on Black Spire Outpost.

"Aurebesh Droid" is based on a version of Aurebesh first seen at Disney parks as part of Galaxy's Edge called "Droidobesh". Specifically, it is based on the Beta version of the font seen in the "Datapad" app: "Droidobesh Neue BETA".

"Droidobesh" was initially designed by Sonny Nguyen. He also designed a few other variations for the parks, though not all of them have been identified.

The movement of designing new variants of Aurebesh began during pre-production on Rogue One; director Gareth Edwards wanted more than one font to be used throughout the galaxy. Among the fonts created for Rogue One were "Domabesh" (seen around Jedha), "Dishabesh" (later seen on Enfys Nest's helmet in Solo), and "Protobesh" (the main language of the sacred Jedi texts in the Rise of Skywalker).

As for why the digraphs (double-letters) are no longer used officially, that probably began sometime during the production of The Clone Wars animated series, when they determined that it made spell-checking easier. According to Lucasfilm's "Holocron Keeper" Leeland Chee, the digraphs have been almost 100% retired since the Sequel Trilogy began, and none of their internal fonts use them anymore. However, they do occasionally show up now and again in decorative capacities.

ps - Aurebesh was not based upon Hebrew, but a chopped up letraset copy of Eurostile Bold Extended. That said, most of the written text in the Original Trilogy consists of the letraset Hebrew fonts "Hebrew Microgramma," "Armon," and "Rahel." Just not the Aurebesh specifically.

pps - Might I recommend "Aurebesh AF Canon" as the most accurate and complete Aurebesh font available. It also comes in "Aurebesh AF Legends," if you prefer to keep using the digraphs, and also has "Tech" styles that let you use an alternate numeral system.

40
Why Did the Empire Use Storm/Clone Troopers and not Droids?
15
What was the longest natural biological lifespan in Star Wars?
18
Doesn't the refined version of the Jedi Code mean the exact opposite of the original code?
21
Did Vader deflect, absorb or block Solo's blaster?
64
Why does Binary exist?
1
Is Enfys Nest's name meant to be a pun?
1
How did navicomputers calculate their positions?