Is “Razor Crest” the name or the model of the Mandalorian's ship?

Mythrol: I like your ship. She's a classic. // Razor Crest, am I right? Pre-Empire? // I have a lot of credits, by the way. That's why I offered to hail a Cruiser. (transcript source)

There's no indication that he knows who the Mandalorian is or has heard of his ship before, but he identifies it as "Razor Crest, am I right?" implying that it's a type of ship. Similarly, in Chapter 6: The Prisoner, Mayfeld makes another comment about it connecting "Razor Crest" with the ship's age:

However, the same episode and some official tie-in material seems to use "The Razor Crest" as the ship's name:

Zero: The Razor Crest is scrambling our signature, and I'm inside the prison system. It's impressive that this gunship has survived the Empire without being impounded. (transcript source)

A former military craft used to patrol local territories in the time before the Empire, the Razor Crest is the Mandalorian's trusty transport and living quarters, as he scours the Outer Rim for fugitives to catch. (starwars.com databank entry)

The Lego model italicizes it on the box as well: 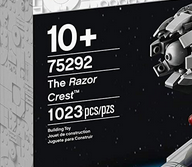 Is there an official source that clarifies this one way or the other? To me it seems most likely that the ship wasn't supposed to have a name and that the characters are referring to it as "The Razor Crest" the way that people in real life might refer to "the Winnebago" or "the 737", but it's also unusual for a Star Wars ship to have no name, especially one that receives so much focus throughout the series.

We have multiple canon sources confirming that the name of the ship is the Razor Crest (e.g. rather than that it's a Razor Crest-class ship).

The Star Wars Book states that the ship is named the Razor Crest. There doesn't seem to be any room for ambiguity here.

When not flitting from world to world in his gunship, the Razor Crest, Mando visits a Mandalorian covert hidden in the sewers of Nevarro.

The Mandalorian at the helm of the Razor Crest, an antiquated gunship that serves him well.

Note that the italicisation indicates that this is a ship's name not a model, since models are always in roman fonts and ship names are always in italics, e.g.

The Young Reader book The Mandalorian: A Clan of Two indicates that his ship is called the Razor Crest.

The Mandalorian was a bounty hunter.

It was his job to capture whoever, or whatever, someone hired him to find. He flew a ship called the Razor Crest.

Series creator Jon Favreua confirmed in a recent panel that the ship is called the Razor Crest.

"The name of the ship is the Razor Crest, that the Mandalorian flies around in."

As to how Mythrol knew the name of the ship (e.g. having just seen it from the outside for a few seconds) it's worthy of note that the original concept artwork for the ship had conspicuous writing on the side that doesn't correspond to classic Aurabesh. It's possible that this is the name of the ship in some script that he's familiar with.

At some point in the design process the writing was scrubbed from the side of the ship, but this may have happened quite late on and never got caught when the dialogue was finalised. 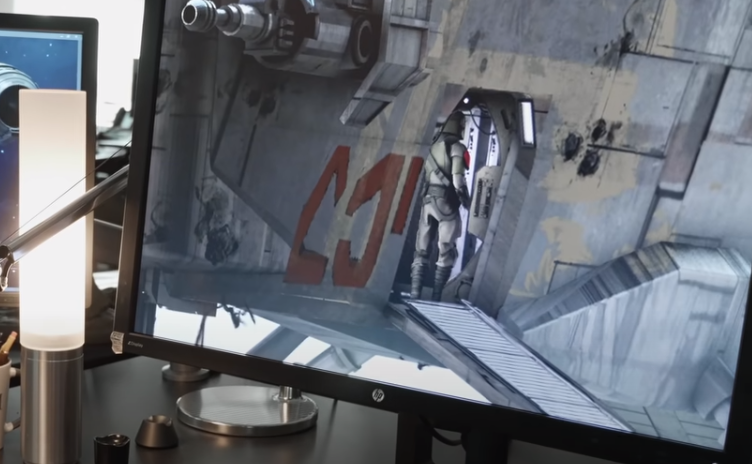 A recent update to Star Wars: Squadrons added a Razor Crest model to go on the player's dashboard:

Both Imperial and New Republic pilots are wary of these pre-Empire military gunships, as their outdated design only makes them more unpredictable.

As far as I know, this is the only source so far to explicitly describe the ship's model outside the context of the particular ship seen in the show. The game takes place about four years before The Mandalorian, so it's unlikely that this is meant to depict Din Djarin's particular ship in-universe, and the description says "these pre-Empire military gunships", implying that "Razor Crest" is a type of gunship.

Furthermore, in Season 2, Episode 4 of The Mandalorian, "Chapter 12: The Siege":

New Republic captain Carson Teva interviews Greef Karga about the events of the episode, and asks about the Mandalorian's ship in an attempt to trick Karga into telling the truth about what happened, but Karga demurs:

TEVA: How long after the Razor Crest jumped out...
KARGA: (scoffs) I never said anything about a Razor Crest.

The fact that it's referred to as "a" Razor Crest indicates that it's a ship class.

4
What is the naming convention for capital ship classes?
28
What model of crashed ship is on Ahch-To?
7
Is the storyteller kid at the end of “The Last Jedi” Force-sensitive?
54
Why is a living creature being frozen in carbonite in “The Mandalorian” so common when it seemed so risky in “The Empire Strikes Back?”
6
Why was Ran’s space station destroyed by the New Republic X-Wing attack team at the end of episode 6 of “The Mandalorian?”
9
Why is the Mandalorian's weapons locker on the Razor Crest so easy to open?
6
Did a ship model used in Star Wars (1977) have Playboy pinups in its cockpit?
1
How was the Razor Crest able to leave the atmosphere?