I've googled several times over many months and can't seem to find the comic again. I read some of it about a year ago online. It featured God (abrahamic) as a black dot with Satan/Lucifer as a red dot with horns. Other gods showed up as different colored dots with various minor embellishments as other characters.

Needless to say, the dialog carried the strip and was pretty well done satire. Unfortunately, I don't remember the author. The devil had three or four kids, one was named Lucy. At least one turned good. Various religious pantheons got involved including Egyptian, Greek/Roman, Hindu, etcetera.

There were multiple attempts to overthrow God, some led by Satan, others by the other pantheons.

This irreverent web comic by James Hatton began with a single dot representing God and the Devil is a red dot with horns (see below). .The strip began in 2004 with God as the main character and is the straight man to all of life’s little jokes and the Devil is the consummate professional of all things evil who is constantly monkey wrenching every single plan. Over the years Hatton has introduced more characters and created his own hierarchy of deities. It first began it was a single panel and since evolved into full page story arcs featuring the In His Likeness characters. 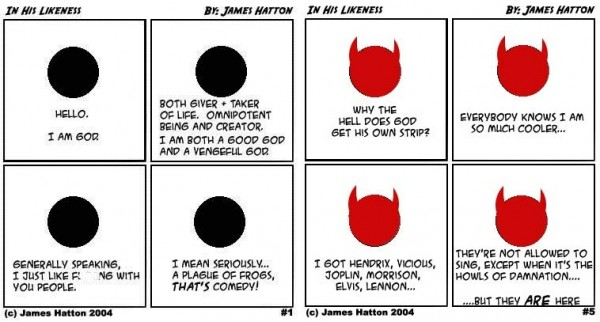 Found by searching for webcomic satan "dot with horns"

Not the answer you're looking for? Browse other questions tagged story-identification supernatural webcomics or ask your own question.

3
Looking for a comic with a jester, the Grim Reaper and a rose
11
Comic book with a boy and animals
4
Looking for an '80s comic book about a planet with pedestrians and wheeled creatures
2
Book with Norse gods and runes
5
Searching for a Batman comic where Batman had no dialogue and Robin and Alfred were the primary characters
3
Manga with an overpowered MC with the ability to control demons and monsters