In the manga Yu Yu Hakusho (or possibly Yu-Gi-Oh), I remember a chapter that featured the following: the main characters had to go up against a minor villain, a teenage trivia game whiz who specialized in one particular arcade trivia game.

In the first half of the game, the heroes were fairly evenly matched, as it turned out their various life experiences gave them a surprisingly good trivia knowledge base. However, in the second half of the game, things suddenly changed: the trivia whiz began to answer questions without even waiting for a single letter to appear on the screen, with perfect accuracy. The main character accused him of using magic to cheat, but it turned out that wasn't the case. The kid was legitimately just a genius and had figured out the trivia machine's RNG wasn't perfectly random and the last half of the questions could be determined by which questions were in the first half, and then had simply memorized all of the tens of thousands of RNG patterns in order to play perfectly. I am not entirely certain how the plot ended, but I think the main cast had to use magic of their own to beat the villain? I believe they argued about the fairness of it, but in the end too many people would be harmed if they allowed him to go through with... whatever his actual plans were, I don't remember that aspect of it.

I'd like to show this scene to a speedrunner friend of mine, but I can no longer find it. I read this in a manga but I'm fairly confident the scene got adapted to anime as well. I also am very certain this happened in either Yu Yu Hakusho or Yu-Gi-Oh - I believe YYH is the more likely option, but I am not 100% sure there. It was definitely either one or the other, and probably happened relatively early on in the series.

You are right in your question. The anime is indeed Yu Yu Hakusho, more precisely Season 3 episodes 81-82, during the Chapter Black Saga.

The Chapter Black Saga is the third and second longest saga in the YuYu Hakusho series. It spans from episodes 67 to 94 in the anime and from chapters 113 - 153 in the manga. The Saga focuses on Yusuke Urameshi's conflict with former spirit detective Shinobu Sensui.

During this arc, the main protagonists meet with the Sensui Seven 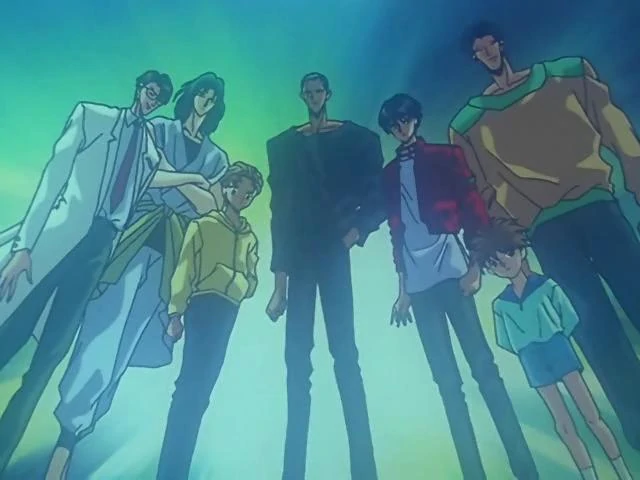 The main antagonists for this arc. They all have a powers related to their code names Doctor, Gatekeeper, Seaman, Dark Angel, Sniper, Gamemaster, Gourmet

The episodes 81-83 are about the fight with the Gamemaster Tsukihito Amanuma whose power is bringing video games to life. Episode 82 in particular is the one with the trivia game.

16
What fantasy work has a quote about “pawns on a chessboard too large to see the edges”?
3
YA/childrens book I read in the mid-late 90s, about videogames & crocodiles?
11
Sci-Fi/Fantasy Anime about a girl who turns into a world-destroyer
3
Manga about a noble's daughter, possibly an isekai
3
Isekai Manga with a blue moon destroyed
11
Arcade owner (in mechanized wheelchair?) attacked and eaten by city alligator