What cartoon features a giant origami crane (and possibly a flying bed) brought to life?

I seem to remember a cartoon or possibly an animated movie which I watched as a kid. I think based on my age I watched it somewhere between 1985-1995 in the Netherlands, possibly as a Saturday-morning cartoon.

I remember two distinct pieces of it, but in all honesty, I might conflate scenes from different animations. However, I think the connecting factor was that one of the main characters had a bag of magic dust that could bring inanimate objects to life, or animate them at least for a short amount of time. It might not even have been the premise of the show, but a single episode featuring this gimmick.

The first part I remember is that the main characters (children?) had to escape from some harm from what I feel is either a giant tower or cloud castle, and they do it by folding a giant piece of paper into a origami crane (the bird, not the construction tool) and animate it so they can fly on its back to safety.

The second part I remember is that they want to use a bed to transport themselves somewhere, and they use the magic dust on the bed to make it animate. However, initially it does not seem to work, until one of the characters figures the bed is missing something that allows it to come to live. So they use what I remember as one of those hunter-moose-head-trophies, attach it to the bed and try the dust again, and now, with a head, the bed is able to come to live.

I have been Googling permutations of flying beds, origami cranes and magic dust, but nothing seems to come up. Little Nemo came up several times in conjunction with the flying bed, and it might be a match, but it seems to missing that thing that "counts as a head".

This sounds very much like The Wonderful Wizard of Oz TVseries from 1986. It is a loose adaption of the first four books about the land of Oz. The part about the flying bed especially comes from the second book The Marvelous Land of Oz 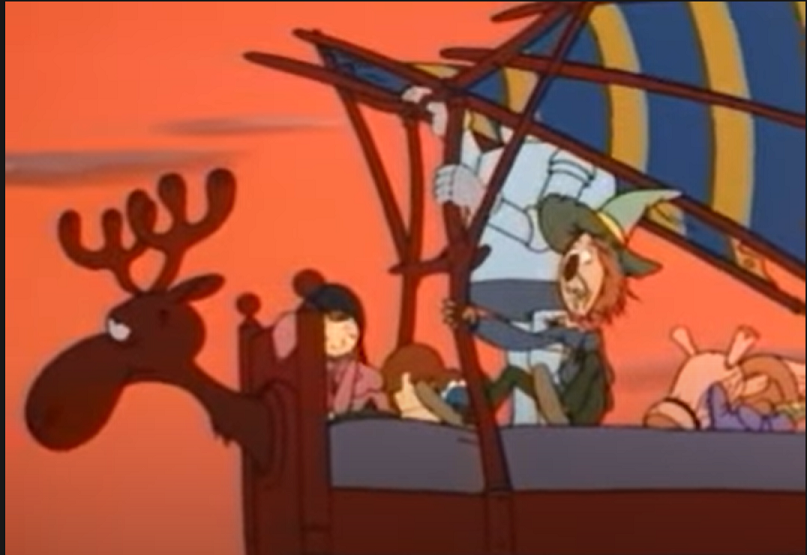 Episode 25 - Trapped in the palace and 26 - The Magical Escape is about how the the evil witch Moombi has seized the emerald city.

In the Throne Room Jinjur, Mombi and the Army surround Dorothy & her friends, but is no match for the Mouse Queen's Secret Weapon. Jinjur attempts to attack, while Scarecrow decides for them to escape using the Come-Alive Powder. Jack uses the Wizard's old tricks to distract and scare the girls as his friends put together and bring to life a Moose-Bed (a canopy bed with a stuffed Moose head attached). Once everything is together, the friends narrowly escape and head off to Glinda in the South.

Later in series oz is attacked by the Nomes. In episode 44 - Miss Cuttenclip and Mister Fuddle, and 45 - The Growleywog Joins The Nomes they learn about papermagic and make the crane. 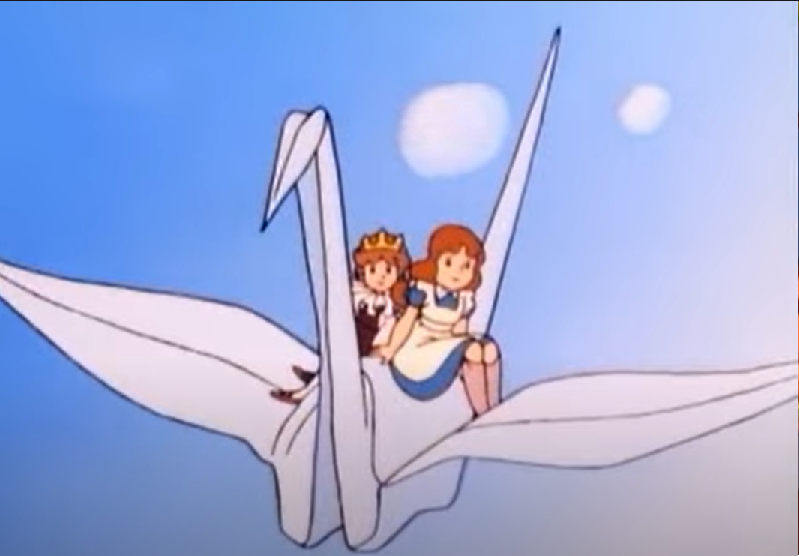 Scarecrow discovers a small box in the Wizard's Chamber which transports Dorothy and Ozma into a world where they meet Miss Cuttenclip the Paper Queen and Mr. Fuddles the Puzzle Man who creates a door which returns the girls back to Oz. As everybody gets everything ready, Dorothy and Ozma practice her magic powers by making a Giant Paper Bird come to life, so that they can ride it in the sky whenever they wish. Knowing the Nomes' fear and weakness, Guph also enlists the help of the monstrous Growleywog to ensure their victory. Practicing for the Coronation, Ozma's magic reveals where to find the Fountain of the Water of Oblivion, an important part of the Coronation

Could it be Paul's Miraculous Adventure?

Pakkun (the teddy bear) could animate and enlarge any object and I clearly remember the opening titles showed them escaping from the bad (giant) guy in the fantastic world. 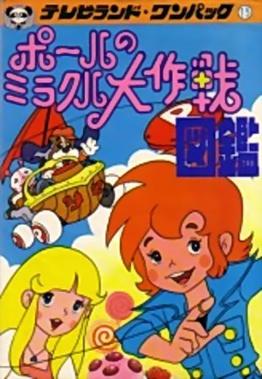