The cover I believe featured a kind of desert scene with one of the characters, and for some reason they kind of reminded me of Elfquest looking people, but not sure if any of the characters were elves.

I thought of this while looking up Tamora Pierce, but I don't think it was that novel, also that possibly the main character was from Earth or something and transported to this fantasy world by the magical weaver character, at some point one of the characters has to learn to use the loom or whatever it's called with the threads of fate and weave their color or someone else's back into existence.

The answer is Colors In The Dreamweaver's Loom by Beth Hilgartner 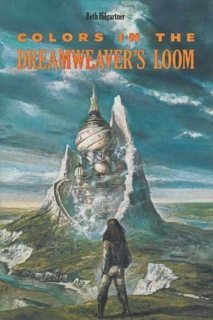 At first Alexandra thought it was a dream. She would just lie there in the forest, quite still, until she really woke up. But the birdlike little girl tugged at her hand again. She tried to explain: "I'm Zan, and I'm lost." The little girl only smiled, clearly not understanding.

That was how Alexandra Scarsdale first encountered the Orathi, the gentle forest-dwellers. She woke from her own private sorrow into a mysterious, peaceful world that seemed removed from time. The Orathi called her 'Tsan, which in their language meant stranger; but as she learned their words and their ways it became clear that she had been sent to them for some special purpose. And when emissaries from the City came with their cruel demands, Zan knew what her destiny was. Only she could protect her new friends from the peril that threatened them.

Zan's quest was to take her far into alien lands, and it brought her a little band of companions whose unexpected talents combined with hers to win a surprising success. Colors in the Dreamweaver's Loom is a fantasy in the grand tradition, filled with varied and fascinating characters and rich in color and adventure.

7
Fantasy Novel - Female Protagonist who climbs a tower and encounters magical obstacles before facing off with a wizard
8
Young adult novel with dragons, magic, and ends weirdly
9
Fantasy novel about coping with a plague
6
Young Adult Fantasy novel about some boarding school, classmates dying, and passing on?
9
Young adult fantasy/scifi novel about Ancient Egypt
11
Fantasy novel where insane character treats dead friend as if he were alive
9
Novel(s) about sidhe/fae intersecting modern day, possibly young adult with Native American themes