Many years ago I saw this movie.

The main protagonist is out with his woman partner (girlfriend or wife, forgot). At some point, after they went to some remote place by car, she is revealed to be an android, her eyes start shining, she starts to scream and tries to kill him, but he manages to run her over with the car. After that, suspected of murdering her, he is on the run.

The protagonist also meets a woman, with whom he becomes friendly. At some point, they discuss whether all of the androids are evil, and the woman insists that maybe not all of them are evil. The woman is eventually revealed to be one of the androids: as she is steering a car, her eyes start shining and she appears to attempt to run over the man, but then she stops on her own, her eyes go back to normal and she drives away.

I suspect this is the 1986 feature-length film (and TV Pilot), Annihilator

A newspaper reporter, Robert Armour, is in a romantic relationship with another reporter, Angela. Angela, along with her friend, Cindy (a photographer for the paper) take a flight to Hawaii. When Angela and Cindy return from the vacation, they act strangely, causing Robert to be concerned, and the women turn out to be androids who try to kill Robert. An alien force planning on taking over the world caused Flight 508 to disappear; they abducted the human passengers and replaced them with identical-looking androids. Robert now becomes the hunter and hunted, knowing he must hunt down the androids.

Here is a screenshot from the girlfriend's robotic reveal: 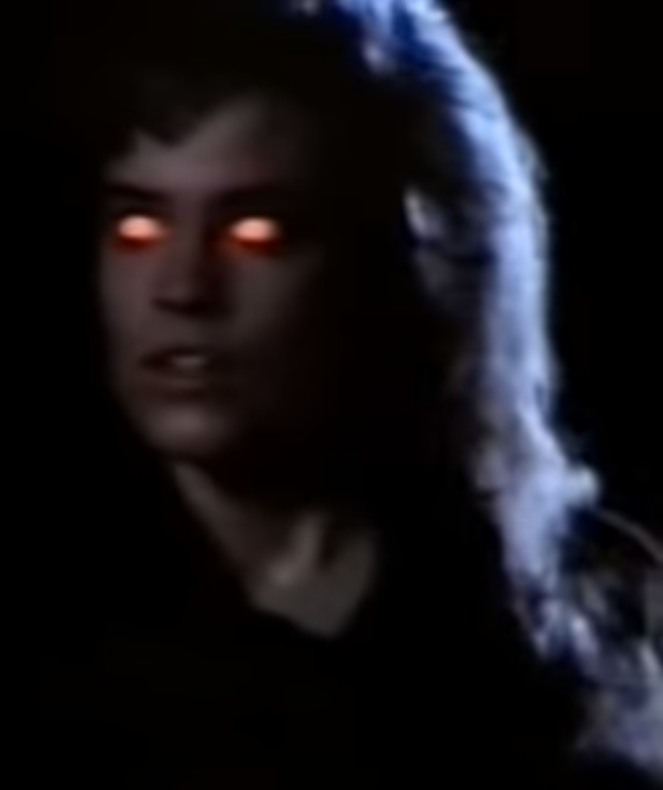 Watching the pilot, indeed, near the end he visits a professor, who exhibits the glowing eyes and attacks him, but keeps pausing to answer questions. The female companion you mention is actually there from early scenes of the movie, taking in Robert when he's being pursued by the police for Angela's death. And indeed, she is revealed to by an android herself (they reference themselves as Dynamitards) and seems about to kill him, but instead stops herself (although it's left ambiguous as to whether she actually decided not to kill him, or if the arriving fire truck scared her off). Since the pilot was never picked up, we never really get any resolution on the mysteries of the film.

Found with a search for film killer androids professor girlfriend

Not the answer you're looking for? Browse other questions tagged story-identification movie androids or ask your own question.

8
Which movie/TV show has an evil cyborg harvesting eyes from androids in a hidden town?
4
Movie with alien nano machines passed by a cigarette
6
Name of a movie/show with a possibly time travelling android that saves the protagonist
16
Movie with talking zombies, one zombie eats his own arm
5
Book where the US creates Android children to protect itself from invasion
4
Movie where people try to kill a possessed woman with morphine