I saw this back when movie/video game rentals were still a thing. I think this was a first person shooter but never played it so I can't be sure- according to the game's description a massive spacecraft (a space hulk is how it's described) is being steered toward an Imperial world by genestealers and the player, as a Blood Angel Space Marine (or part of a squad of Blood Angels) boards the hulk to divert it from crashing onto said Imperial planet. 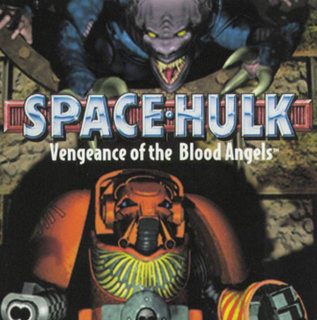 The second video game adaptation of the Space Hulk board game (after the 1993 PC game Space Hulk), Vengeance of the Blood Angels puts players in control of a Space Marine Terminator, belonging to the honorable Blood Angels chapter, in the 41st millennium. Like the previous adaptation, this game combines first-person shooter gameplay (with a calsutrophobic grid-based system similar to late-'80s first-person RPGs) with real-time tactical elements.

Along with numerous training "historical" missions (including those based on the original board game and the 1993 PC game), the game features a main campaign where players start off as a lowly recruit in a squad sent to prevent a runaway "space hulk" (infested with Tyranid Genestealers) from crashing into the planet Delvar III. The game starts off with the player taking basic orders from their superiors, and eventually the deaths of the commanding officers result in rapid field promotions that place the player character in control of the entire squad.

Not the answer you're looking for? Browse other questions tagged story-identification video-games warhammer-40k or ask your own question.

6
In what game do you play a knight fighting skeletons in a cemetery at night?
2
PlayStation 1 Game about a boy who gets amnesia
8
Browser game where you play as a brain jumping over hurdles
10
Video game with alien bio armor
6
Is there anything in the lore that supports this game mechanism for the Dark Angel in the 3rd edition?
2
PC game where you play a blind creature who perceives via echolocation
4
1990s Video Game (I think on the Sega Genesis) where you controlled a gun-sight which you used to kill monsters, primarily by blowing their limbs off
26
Video Game where you control a woman (an acrobat?) in early 1900s Europe who can interact with shadows