What species was the Party Tree in Hobbiton

In The Fellowship of the Ring, there is a large tree in Hobbiton called the Party Tree where Hobbits hold functions.

What species is it?

I could find only a small number of quotes about "the tree" none of which give any details about its species.

There was a specially large pavilion, so big that the tree that grew in the field was right inside it, and stood proudly near one end, at the head of the chief table. Lanterns were hung on all its branches.
The Fellowship of the Ring, Book I, Chapter 1: A Long-expected Party

'They've cut it down!' cried Sam. 'They've cut down the Party Tree!' He pointed to where the tree had stood under which Bilbo had made his Farewell Speech. It was lying lopped and dead in the field. As if this was the last straw Sam burst into tears.
The Return of the King, Book VI, Chapter 8: The Scouring of the Shire

We know the tree must have been rather large and at least had plenty of meaning to Sam.

In J.R.R. Tolkien: A Biography, it is suggested that the inspiration for the tree's outcome may have been a Willow:

"One incident in particular remained in his [Tolkien's] memory: "There was a willow hanging over the mill-pool [at Sarehole] and I learned to climb it. It belonged to a butcher on the Stratford Road, I think. One day they cut it down. They didn’t do anything with it: the log just lay there. I never forgot that.""

The reasoning for which is the similarity in the Party Tree simply lying lopped and dead in the field and the willow log just laying there.

After the War of the Ring, Sam began to replant the Shire with his gift from Galadriel. Included in his gift was the seed of a Mallorn tree, which he planted where the Party Tree had once stood.

The little silver nut he planted in the Party Field where the tree had once been; and he wondered what would come of it. All through the winter he remained as patient as he could, and tried to restrain himself from going round constantly to see if anything was happening.

Spring surpassed his wildest hopes. His trees began to sprout and grow, as if time was in a hurry and wished to make one year do for twenty. In the Party Field a beautiful young sapling leaped up: it had silver bark and long leaves and burst into golden flowers in April. It was indeed a mallorn, and it was the wonder of the neighbourhood. In after years, as it grew in grace and beauty, it was known far and wide and people would come long journeys to see it: the only mallorn west of the Mountains and east of the Sea, and one of the finest in the world.
The Return of the King, Book VI, Chapter 9: The Grey Havens

Sam's Mallorn tree would become a place for many to visit, and was the only mallorn west of the Misty Mountains in Middle-earth.

Probably an oak or horsechestnut, as Daniel Roseman suggested. In "A Long-Expected Party", Tolkien wrote:

One morning the hobbits woke up to find the large field, south of Bilbo's front door, covered with ropes and poles for tents and pavilions. A special entrance was cut into the bank leading to the road, and wide steps and a large white gate were built there. The three hobbit-families of Bagshot Row, adjoining the field, were intensely interested and generally envied. ... The tents began to go up. There was a specially large pavilion, so big that the tree that grew in the field was right inside it, and stood proudly near one end, at the head of the chief table.

In one of Tolkien's line drawings, "The Hill: Hobbiton across the Water", there is a field south of Bag End's entrance, near Bagshot Row, with a single tree near its southern edge. Presumably this is the Party Tree. See fig. 97 in Hammond & Scull's book, J.R.R. Tolkien: Artist & Illustrator (1995). A color rendering of part of this illustration is given here at the bottom of the webpage. The tree looks like a ball of green on a trunk, compatible with any number of deciduous trees, but not a willow. Also, it is located on a hillslope well above the Water, an unlikely place for a willow. 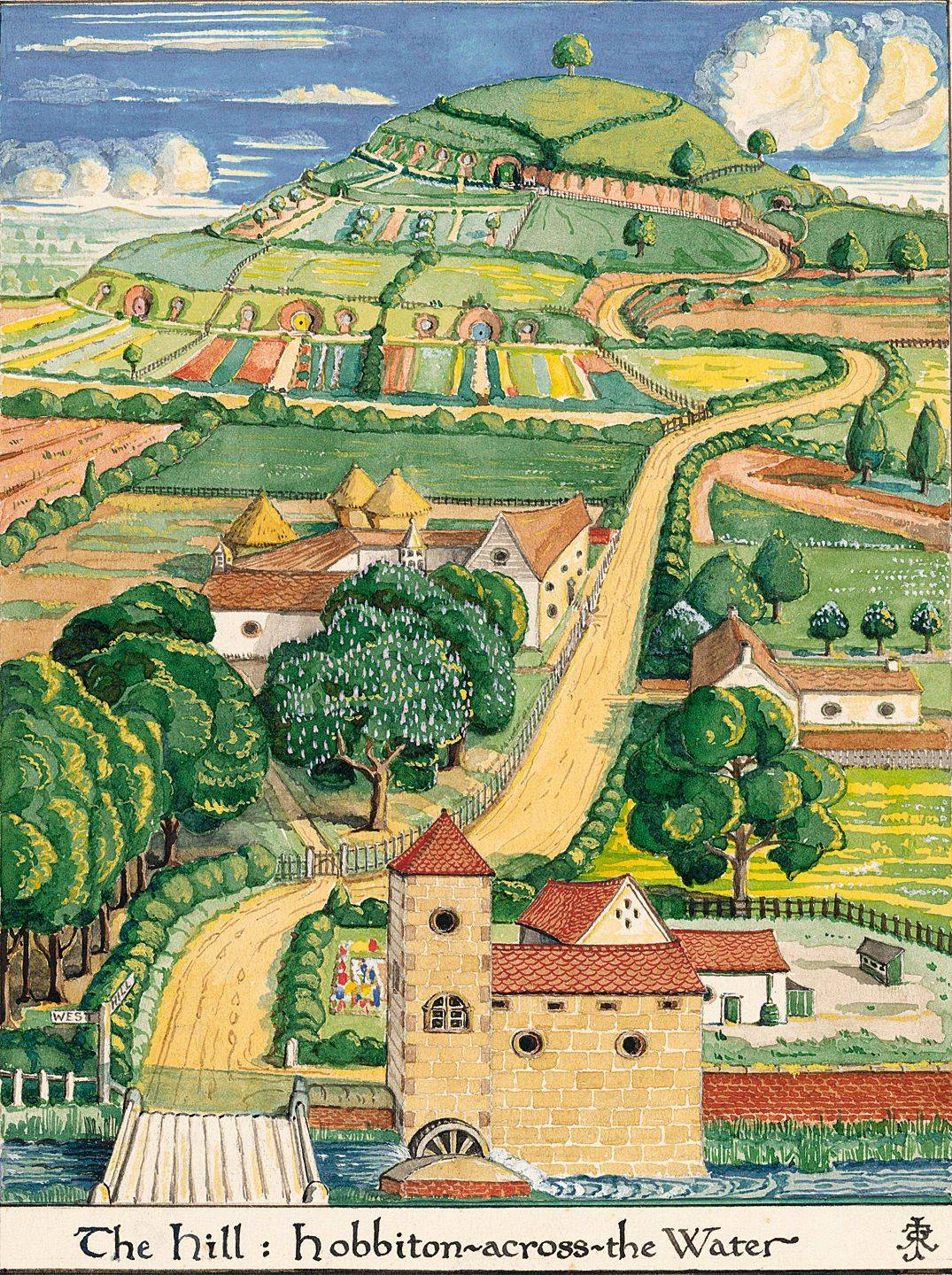 73
What was the “Watcher in the water”?
29
Why was a fox able to think about the hobbits on the road to Rivendell?
15
Why did Frodo travel with the elves who were leaving Middle Earth?
8
Where did Bilbo wander?
51
Why was Tom Bombadil so unconcerned about the fate of Middle-earth?
5
How did Gollum know about the rescue party from Dol Guldur?
14
How often did Gandalf return to Hobbiton after the events of The Hobbit?
14
How does Gandalf get informed of Bilbo's 111st birthday party?
8
Is there a timeline of the Witch King's visitation of the Barrow Downs in relation to the hobbits' visitation?