What novel has advanced alternate Earth humans trying to escape through portals from horrific inter-dimensional creatures?

I read this book while on vacation in Canada around 1985. The book seemed to be a recent release and consist of about 50/50 narrative and character action and was short, about 250 pages or so. The cover featured a menacing shadow of creature or creatures with slanted glowing 'eyes' (maybe fangs?) over an Earthly landscape of some sort, but I want to say pyramids and palm trees - it was a simple illustration. I realize a similar book from the time was Terry Brooks' 2nd Shannara novel with demons invading through portals; it is not the same book.

The book starts out almost like a horror novel with a few grisly murders and encounter with a vicious, fanged nocturnal creature. If I recall correctly, the opening chapters feature a humanoid who traveled through a portal is trying to make contact with government officials while evading these creatures which only seem to be bent on killing. At some point in the story it is revealed that the creatures accidentally leaked through while the alternate Earth humans were trying to seek asylum and escape their own overrun Earth. I can't recall if the alternate Earth was from Earth's future or just an alternate timeline.

Eventually contact is made while the whole world is on red alert fighting off the invading creatures. The alt-earthlings, in exchange for asylum, agree to pay the governments of the world in huge amounts of valuables dumped via portal in massive quantities. In one country thousands of tons of diamonds are dumped but I most remember a vignette scene where thousands of tons of rice are dumped in some impoverished African nation. A starving child witnesses the dump of rice and starts shoving handfuls of uncooked rice in his mouth only to vomit it up moments later because of his extreme starvation.

That is all I can remember - anyone remember this one from 30 years ago?

Sounds like Clifford D. Simak's "Our Children's Children." The invasion was taking place in our future, and our descendants were attempting to escape to our present through time portals. 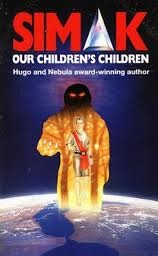 And it was wheat that the child gorged on. From an Internet Archive copy of Worlds of IF (June 1973):

The village had known hunger, but now the hunger ended: For some time in the night a miracle had happened. High up in the sky, just beyond the village, a hole had opened up and out of the hole had poured a steady stream of wheat. The foolish boy with the crippled leg who belonged to no one, who had simply wandered into the village, who was crippled in his mind as well as in his body, had been the first to see it. Skulking through the night as well as he could with one leg that dragged, unable to sleep, looking for the slightest husk that he could steal and chew on, he had seen the grain plunging from the sky in the bright moonlight. He had been frightened and had turned to run, but his twisting hunger had not let him. He had not known what the cascade was at first, but then it was something new and it might be something he could eat and he had not run away. So, frightened still, he had crept upon it and finally, seeing what it was, had rushed upon it and thrown himself upon the pile that had accumulated. He had stuffed his mouth, chewing and gasping, gulping to swallow the half-chewed grain, strangling and coughing, but stuffing his mouth again as soon as he managed to clear his throat. The overloaded stomach, unaccustomed to such quantities of food, had revolted, and he had rolled down off the pile and lain upon the ground, weakly vomiting.

Not the answer you're looking for? Browse other questions tagged story-identification novel horror alien-invasion parallel-universe or ask your own question.

8
Fantasy novel - Primitive humans enslaved by superior race from blood portals?
9
Book: alien planet with multiple alien species (underground rats, flying sharks…) at war with each other
7
Humans orbiting exoplanet establish telepathic control of massive six-legged feline creature that has IR-sense plates instead of eyes
7
A witch, a cat and a vampire are fighting for the survival of two worlds together with a dragon, an incubus, a human and a werewolf
6
90s? Novel dimensional portal opens in Florida aliens emerge
10
Sci-fi novel with lizard people running the government
11
Story about an invasion of Earth by creatures marginally more advanced than humans