The show, from what I remember, is about kids who fight bad guys who are these grey guys in black suits. One of the fight scenes is in a warehouse and outside the warehouse there are these wooden shipping boxes they hide behind.

I remember a white girl and a black boy and I’m not sure about the rest. The girl kind of reminds me of Alexa Vega.

They go on these missions regularly by putting on glasses that resemble virtual reality gaming goggles. In between missions they meet in a sort of limbo which is just this white ‘realm’.

One of the scenes I remember is of the girl fighting in a Spartan inspired arena and ‘king’ or ‘sultan’ of sorts is giving thumbs up or thumbs down for the fighting.

I think the final scene of the show is a victory after this fight in the arena and then they go home.

Cyberkidz TV Series - In the Power of the Glove!

Cyberkidz sci-fi TV series from 1996 featuring Zorak, the thousand-year-old evil wizard; Zeist, his henchman; and Kyle, Ian, Danica and Zak (K.I.D.Z. - get it?), who use the Power of the Glove to protect Cyberland and Earth.

They use 3D glasses and power gloves to meet in white void, there is a black kid and a white girl and two others. The glasses and the gloves are the source of their powers. (as seen here at 3:10 mark:

See if this rings any bells:

Screenshot from once an episode occurrence (because they meet in the void at least once): 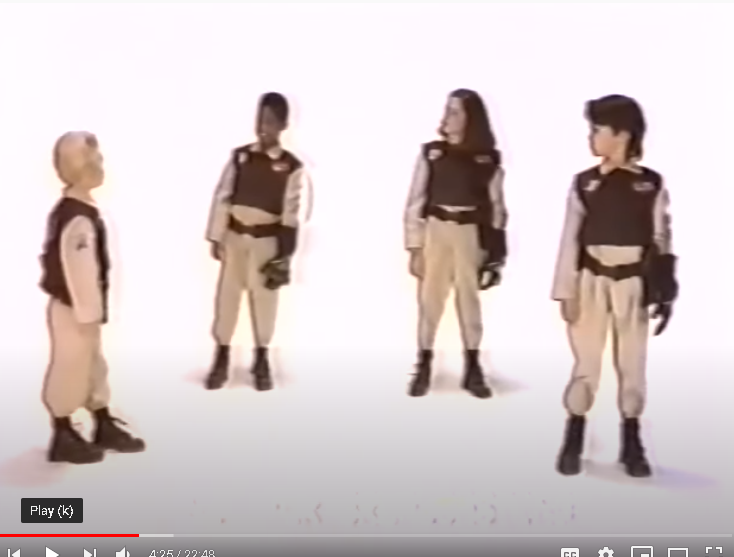 7
80s TV series with aliens that grow in small pods
12
70s/80s sci-fi movie or TV show set in space, with a hand-to-hand fight in an arena-type environment, that the bad guy seemingly won
3
What Anime features a monster blob being fought in New York City?
9
Looking for TV show or movie with monsters that came to life from old film reels
19
Old kids show from the 80's about two kids with a magical compass that took them to another world
7
Movie: A black blob or possessive creature is taking over people in a town
1
Cartoon series where 2 boys and 1 girl summon monsters ( NOT MAGI NATION OR HUNTIK )
3
80s or 90s cartoon series - Female protagonist has a large cat as a pet and collects crystals or gems
2
Anime about two girls who have compact mirror-like things with little Tamagotchi-like creatures, and transform into cute outfits to battle monsters