Please help, I have literally scoured the internet for information, can anyone identify?!

I read this book (these books, think it was part of a trilogy) when I was quite young, maybe 15 years ago now, and it may have already been around for a few. It may have had the words blood or portal in the title though I'm not sure.

I just remember that the human race (fairly primitive, swords and shields type era) had been enslaved by a race of gentically superior creatures (after numerous wars) called the csendrook (or something like that)

Various worlds of man were connected with portals that these creatures had invaded through (they were human-like but bigger, faster and with sharper teeth) The portals being opened using blood and littered with human skulls! No man had bested one of these creatures in battle for years, since the invasions, until a prince among men killed one. The rest of the story centres around his leading a rebellion I believe, leading to a sword confrontation with a prince of the csendrook (or whatever they are called) at the end. I believe the planet somehow mystically comes to the princes aid.

It probably sounds lame now, but I have very fond memories of this book, and if anyone could remember it I would be more than grateful! 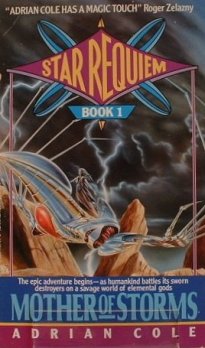 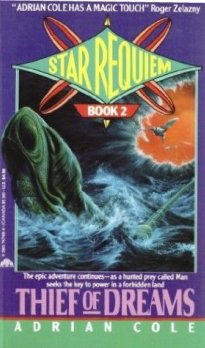 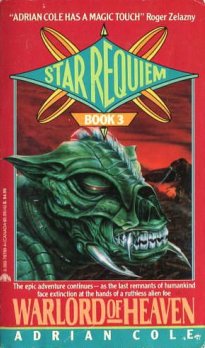 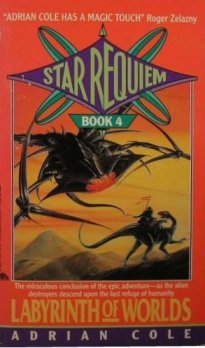 I believe you're looking for the "Star Requiem" quartet by Adrian Cole.

Edited from the preface of the fourth book, "Labyrinth of Worlds":

Man once ruled over an Empire that stretched throughout countless worlds, worlds that formed a complex cycle, a self-contained chain.

In his hunger for knowledge, Man unlocked the door to another realm, that of the alien race, the Csendook, and thus began a thousand year war in which these ferocious aliens, faster and stronger than Man, began the inexorable conquest of his Empire.

In desperation, facing extinction, Man's Imperator Elect and his Consulate sought to escape the Csendook tide. On the world of Eannor, the Imperator's Prime Consul and the principal scientist, Zellorian, used dark and forbidden powers to create a gate into a separate cycle of worlds, a feat thought to be impossible. Zellorian brought the Imperator Elect, his remaining Consulate and the last of Man's army through to the world of Innasmorn, the Mother of Storms.

Innasmorn is a world of elemental forces, where the storms are worshipped as gods by its inhabitants. They, who are themselves partly elemental, have no use for technology and have almost completely outlawed the use of metals. When they learn of the arrival of the intruders, the Men of the Imperator, they begin preparations for war.

A small group of Innasmorians under Ussemitus, a woodsman, search for a forbidden land far in the west of Innasmorn, which is said to contain ancient powers. They fear that Zellorian will seek out these powers and attempt to harness them in his new thirst for control.

[Elsewhere] Aurangzar, now Supreme Sanguinary of the Csendook, is obsessed with the belief that the Imperator Elect is still alive. He sends one of his loyal commanders, Vorenzar, on the trail of the Imperator...

The part where a Csendook "hunting party" enters one of the portals:

Using an Opener, one of the Csendook sub-races bred for the creating of gates between worlds, Vorenzar finds a way through to Innasmorn.

At another point in the story, the Consul is sent through the gate:

Zellorian sends Pyramors back to Eannor in exchange for the safety of his rebels. As he travels through the gate between world cycles, Pyramors meets an Accrual, a parasitic being that feeds on the blood and sacrifices that create gates. The Accrual promises Pyramors a return to Innasmorn if he aquires sacrifces for it.

You can also read the opening chapters of the book here.

Note: There are similarities between this series and the author's own "Blood Red Angel" which was published later. Instead of an alien race, the ruling class in that book are highly-evolved humans called "Lightbenders". But they're cruel just the same. They use their portals to hunt and gather food, human species included.

I don't think this is what you are after, but some of your description reminded me of Julian May's Pliocene Saga...

12
What novel has advanced alternate Earth humans trying to escape through portals from horrific inter-dimensional creatures?
8
Red-haired woman bethrothed to silver-haired prince, they are in charge of an island?
11
40s/50s short story about a mutant family with psi powers
11
Aliens attack earth. Alien commander sues for peace after super-powerful 2nd alien race tries to blow up the sun?
9
80s Fantasy novel evil twin and swordplay
16
Identifying a novel about floating islands, dragons, airships and a mysterious machine