I had this action figure in the 90s which I believed was manufactured by Bandai. It was a rubber samurai figure (it looked kind of evil, perhaps an oni in samurai attire) that wore a white armor.

You could detach the white armor and the rubber figure would stick to surfaces if thrown at them with sufficient strength.

I'm trying to find any information about this toy and the character on which it was based on, did anyone have this toy as a kid or has seen it before?

I think the toy might have been an Giraya Ninja, a Japanese toy that was manufactured in 1990 by Bandai, it was also known as Tacky Stretchoid Warriors in the USA. The toy consisted of a stretchy rubber figure in armor. It could be removed from the armor and be slinged away against a wall where it might stick.

The toy was based on the Japanese series Sekai Ninja Sen Jiraiya that run from 1988-1989.

The story of the show is, according to Wikipedia

The Sorcerers Clan, led by the centuries-old Org Ninja Dokusai, had made its move to retrieve the treasured map of Pako that has been in possession by the Yamaji family for generations. Tetsuzan Yamaji, the 34th grandmaster of the Togakure Ryū Ninpō, entrust his son and daughter, Toha and Kei, to protect the Pako from the forces of the Sorcerers Clan. By donning the Jiraiya Suit inherited from his father, Toha becomes Jiraya, Master of the Togakure School, who must face against the evil Sorcerers Clan, as well as numerous ninjas from different parts of the world. 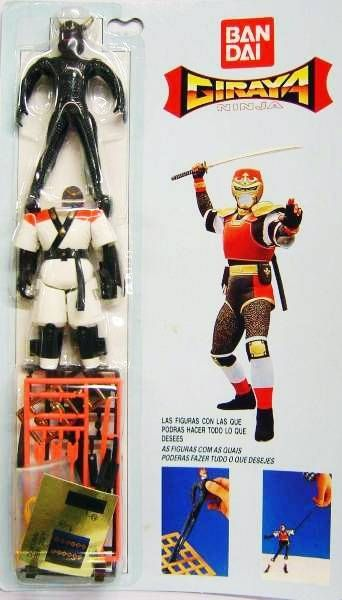 3
Was there an evil version of Dark Hawk? Not one from the future, but a bad guy with a whole other amulet?