Paperback novel where a female kendōka kills an opponent because her sword is magically replaced, then she is transported to another world

I was answering a question about Kendo rules on the Martial Arts SE, and it led to me suddenly flashing back on a book I read as a child.

I read this from the library in Ashland, KY when I was a child (probably in the late 1980s to the early 1990s). It was in English and was a paperback, probably around the 200-300 page count. The protagonist is a female kendōka who I think is introduced in a cell in a mental ward. We get the explanation that she killed her opponent in the ring with a real sword during a competition (with the explanation that she must have hidden the sword inside the bamboo covering), and we get a flashback from the woman's perspective that as she scored the fatal strike to the head, she felt the weight of the sword change from a bamboo shinai to an actual sword, but couldn't stop the strike before it cut into her opponent, easily cleaving the protective armor. Shortly thereafter, she disappears from her cell, and winds up in a fantasy world kind of like Japan. I think that early on, she meets a priest of some sort who wields a hammer at the end of a long staff who gives her a somewhat generic "chosen one" speech before sending her on her way.

From there, it's a bit hazy, but she finds that, in the world she's in, warriors can fight with up to three swords. At the beginner level, you have only the katana (the long sword). Once you have proven yourself, you are given a second smaller sword, the wakizashi (side note, I don't know if they used these terms. I just know them from my own martial arts practice). The third level of training allowed you to carry a two-handed sword. I remember that she trains, and proves herself enough to carry the third sword, I think while fighting buglike humanoid creatures. At the end of the book, she encounters the priest again, who attacks her with an intent to kill. She defends herself, including slashing him across his belly. He yields, and begins packing his stomach with cotton so that he doesn't violate his religious imposition to shed no blood. I think that, after that, she might have been transported back to Earth? I don't recall.

The only other detail that I remember was that the character was shown on the cover with two swords (and I think in a short kimono?) fighting the bug creatures, and I complained to my older brother that it wasn't accurate since she had acquired a third sword, and he explained to me that book covers were frequently inaccurate, particularly for fantasy and science fiction books.

Alright, and a little more Googling, and I found the right combination of terms. It was The Swordswoman by Jessica Amanda Salmonson. 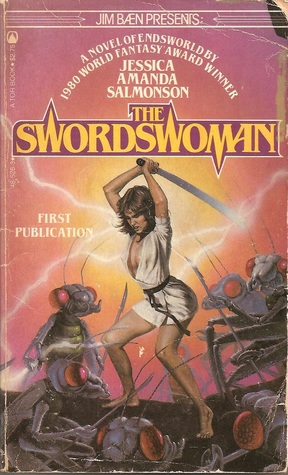 Kendo is a thing of the spirit, or so Erin Wyler thought of the ancient art of Japanese sword fighting--until the day in the fencing hall when her bamboo sword was transformed into a supernatural steel blade and her sparring partner became a loathsome demon. Suddenly kendo had become a thing of madness.

The story concerns Erin Wyler, a young Earth woman who's dreamt of living a hero's life in another world. She's a loner, going in and out of institutions her whole life and never finding any amount of happiness except in studying martial arts. During a kendo match, she kills her opponent but his wounds reflect a metal blade, not the bamboo stick she was using. An obsessed paramedic discovers that both she and her opponent have had dreams about the same world, only from opposite points of view. Erin dreams of being the rebel who kills an evil tyrant; her opponent dreamed of being that tyrant. In that alternate world, however, Erin's alter-ego Merilia is the one killed so forces present in both worlds conspire to bring Erin to Endsworld to fulfill Merilia's destiny.

Salmonson bases the alternate reality, Endsworld, on Asian influences. The world is ruled by a warrior elite whose ranks are differentiated by the number of swords they carry. One-swords are cannon fodder, minimal training with a short sword - the i. Two-swords are better trained, carrying both i and mai, and run the gamut from merely competent to expert. Three-swords carry the oude - a great sword - and are wuxia style masters.

The story follows Erin as she arrives in Endsworld and her development from unwilling pawn to someone able to replace Merilia.

7
old fantasy book about a barbarian with swords in place of his hands
6
YA book about a young powerful female caster attending a school that trains in magical arts and duels
4
Movie about a fantasy world in which a human is brought to train in martial arts for a mission/quest
9
Novel where a berserker involuntarily kills a female magician he may have loved
5
What is the name of the anime kids, mecha and fantasy series with a group of 4?
3
Manga where the MC is a saint and transported to another world with another girl but is cast aside and almost killed
17
Novel about someone repairing an emperor