sci-fi book where everyone older than 18 was dead

This was a sci-fi book where everyone older than 18 was dead. The eldest was some boy who's 17, I think, and I believe that they all had superpowers, if not all then some of them. The book started when the parents were already gone for about a month and the food started to end, so a group of teenagers went to some field or something looking for food and there were worm-like beings that killed one of them, a boy. That's all I can remember and some details might be wrong, but I think it went like that. I started reading it in 2015 or 2016. 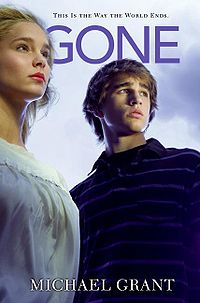 One minute the teacher was talking about the Civil War. And the next minute he was gone.

He just vanished - along with everyone else over the age of 14 in a 20-mile radius around Perdido Beach, California, which is also now enclosed by an opaque, impenetrable dome. The children left behind find themselves battling hunger, fear, and one another in a novel strongly reminiscent of William Golding's Lord of the Flies. Things go from bad to worse when some of the children begin exhibiting strange powers, animals show signs of freakish mutations, and people disappear as soon as they turn 15.

Contraindications are that the age break is 15, not 18, and they just disappear rather than dying, but there's powered children, and flesh-eating worms (E.Z. is first eaten in the second book, Hunger).

Not the answer you're looking for? Browse other questions tagged story-identification post-apocalyptic soft-sci-fi powers or ask your own question.

2
Sci-fi book where everyone older than 12 was dead
4
Young adult science fiction novel set on Mars. Teenage romance between girl and guy with odd name
13
Identify a book series, where order fights against chaos and they travel back in time
13
Science fiction book about everyone vanishing except two guys and a young boy
3
Novel involving a girl and her sister with powers (at least one over death), invited to join people with other powers