Were lithium crystals ever actually used in warp drives?

In the earliest episodes of the original Star Trek, the Enterprise's warp drives are powered by and/or regulated by "lithium", and a maintenance visit is made to the "lithium cracking station" of Delta Vega.

According to Star Trek Encyclopedia, originally, lithium was said to be used to control the warp reaction, but it was quickly realized that since lithium was a real element, with known properties, it would not be able to do some of the things the writers wanted it to do.

In the prequel series Enterprise, no mention is made of lithium per se as a substance relevant to warp travel, and ships are apparently already using dilithium (e.g. the ENT episode Affliction explicitly mentions dilithium).

In current Star Trek canon, was crystalline, metallic, or elemental lithium (atomic number three on the periodic table) ever actually used in warp engines? I can see two ways to interpret the use of the term "lithium" in the context of the entire franchise:

I know the out-of-universe reason that "lithium" was dropped from the script. The question is solely about whether this represents an in-universe change in technology (i.e. a brief period of time in which actual lithium is used) or whether the "change" has been retconned as a terminology issue or similar.

In response to an answer by M. A. Golding, it does make sense that the terms "lithium" and "dilithium" are both shortened forms of some longish chemical name. What I'm looking for is actual evidence of this. For example, if there is an early script-writer's guide that says, "The power matrix of the Enterprise's engines is regulated by crystals of Tessellated di-Lithium Hydro-argentate, or "lithium" as it is called by the crew.", that would be an excellent answer. If there is an episode where some established characters continue to use the term "lithium" while new characters (e.g. a crystal merchant du jour) call it "dilithium" (e.g. "I understand that you need some high-quality level five dilithium hydrate for your engines, eh.?"), that would also be an answer.

The Star Trek: The Next Generation Technical Manual gives a long-form name for dilithium crystals as "2<5>6dilithium 2<:>1 diallosilicate 1:9:1 heptoferranide": 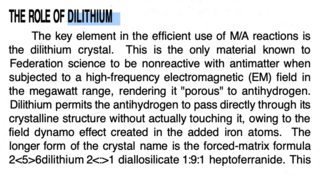 THE ROLE OF DILITHIUM

The key element in the efficient use of M/A reactions is the dilithium crystal. This is the only material known to Federation science to be nonreactive with antimatter when subjected to a high-frequency electromagnetic (EM) field in the megawatt range, rendering it "porous" to antihydrogen. Dilithium permits the antihydrogen to pass directly through its crystalline structure without actually touching it, owing to the field dynamo effect created in the added iron atoms. The longer form of the crystal name is the forced-matrix formula 2<5>6dilithium 2<:>1 diallosilicate 1:9:1 heptoferranide.

I don't know if you'd count this as part of current canon; the next page goes on to say that by the TNG era they can synthesise dilithium, which contradicts DIS:

highly complex atomic structure is based on simpler forms discovered in naturally occurring geological layers of certain planetary systems. It was for many years deemed irreproducible by known or predicted vapor-deposition methods, until breakthroughs in nuclear epitaxy and antieutectics allowed the formation of pure, synthesized dilithium for starship and conventional powerplant use, through theta-matrix compositing techniques utlizing gamma radiation bombardment.

It has always been my assumption that dilithium has a long and complex chemical name, and that a phraase like dilithium oxide or dilithium hydride is part of that chemical name, perhaps at the front, the back, or somewhere in the middle.

And I assumed that in the era of early TOS the official starfleet jargon for that substance was shortened to "lithium", but someone complained that could cause confusion with the element lithium, and so someone in Starfleet Command decreed that the substance would not be known by its full chemical name, nor as lithium, but as dilithium instead.

And if dilithium was mentioned in the era of Enterprise as a substance vitally necessary for warp drive, then dilithium should have been the officially approved phrase to use instead of the long and complex chemical name, until it was changed by being shortened to lithium at an unknown date and then restored to the longer dilithium early in the era of TOS.

And I sort of suspect that calling the warp drive crystals lithium, the same name as a common element, caused some sort of disaster when negotiating with aliens for dilithium crystals. Starfleet thought it would get vitally needed dilithium crystals but actually received relatively useless lithium instead, perhaps leading to many bloody defeats in a war for lack of enough dilithium!

Not the answer you're looking for? Browse other questions tagged star-trek warp federation retcon engineering or ask your own question.

2
Could a starship's impulse engine reactor produce enough energy to power the warp drive?
5
Could a shuttlecraft warp engine be used on a starship?
6
Why didn't they teach Captain Pike Morse Code?
13
Has there ever been a warp / non-warp collision?
32
How did Cochrane obtain dilithium for the first warp flight?
7
What is the fate of the USS Franklin in the Prime timeline?
11
Can TNG-era warp drive be used to travel at sublight speeds?