Teenagers discover a network of tunnels to other times

I'm trying to identify a novel for young adults about travelling through time using a maze of time tunnels. I borrowed it from the Town Library in the early 1970's, so it may have been written during the late 50's or early 60's.

I think it's set in the North of England, possibly Newcastle. Two teenage lads fall through undergrowth into a large chamber. They can't climb out, and the only way is to walk through a tunnel at one end. It becomes a maze of tunnels with glowing walls, and when they reach the opening at the far end, they have travelled back to pre-history.

They walk back through the maze, and then through again, and come out at a different time. They repeat this exercise, and find that taking a different combination of left and right turns takes them to a different destination time.

I believe that, at one point, they were at 5,000 BC, and rescue a girl from being sacrificed.

Their final journey through is to take a lot of right hand turnings, so that they end up a long way in the future. The exit of the tunnel is manned, and the attendant tells them that "The last person to come through was a Roman soldier". They are then anathematized, and sent back to their own time.

Two years on, and there has been a power station built over the chamber, with the chamber itself housing the reactor.

If anyone can identify this book, I would be very grateful. I can then also buy a copy through Abebooks!

I believe this could be "The Time Maze" by Reginald Maddock, published in 1960. Online information about this book seems really scanty - the Goodreads page, for example, is disappointingly brief - so what I am writing is from memory, and may not be 100% accurate.

The story deals with two boys who fall into a cavern while exploring the woods near their home. The cavern leads into a maze, and by traversing the maze they can emerge at various points in history. I believe they go to the age of dinosaurs, to the neolithic era where they meet some cavemen, and eventually to the future. There they find a guardian-type figure, who prevents them entering (possibly by putting them to sleep - I don't recall).

I have not been able to find a good online summary of the book, but possibly the cover might jog the OP's memory. 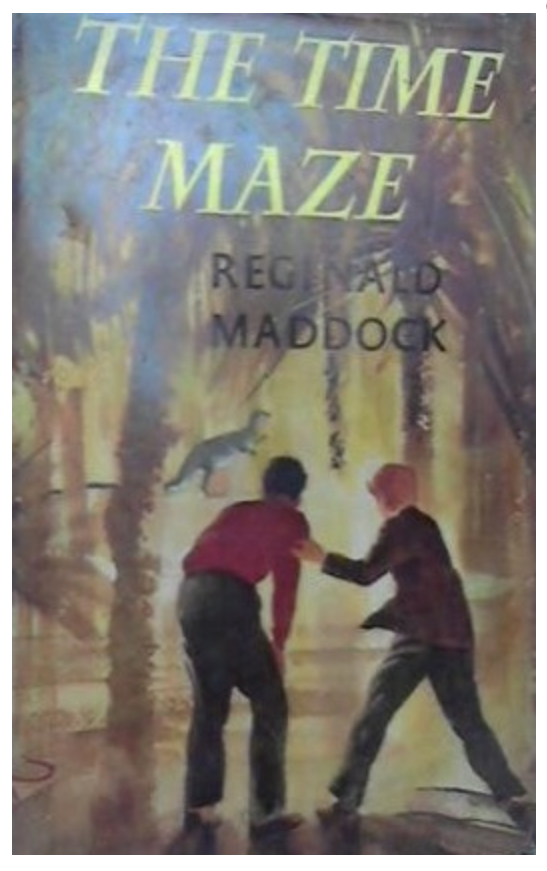 Not the answer you're looking for? Browse other questions tagged story-identification novel time-travel young-adult or ask your own question.

10
Fantasy novel, traversing a tunnel, having to crawl for days?
5
Movie about teenagers and werewolves on a school trip
5
Short story about a government super agent investigating an alien phenomenon
4
Seeking book from elementary school, with dinosaurs and probably time travel
3
Black and White film with cars in tunnels which were flooded
7
Science Fiction Novel from the 70's (I think) about a cryogenically suspended man who awakes in the far future
4
TV show about a group of people that travel through time to the past trying to identify an evil character