Are there any resources for recipes from the Star Trek universe?

The Star Trek universe has many displays or references to some exotic and interesting foods from alien cultures.

Some interesting examples include:

Are there any resources, online or otherwise, which have recipes for real-world versions of some of the alien dishes featured in the Star Trek universe? I'm especially interested in production notes describing how the dishes were prepared for use on-stage, but fan-created or official derivative recipe books would be good to see as well. 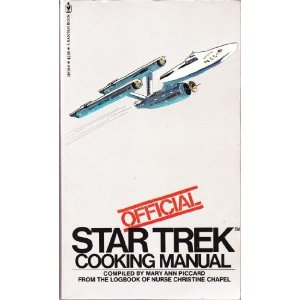 The author's name -- and this is no joke -- is actually Piccard.

My wife has cooked some of the recipes from the Star Trek Cookbook. Sisko's chicken is pretty good. 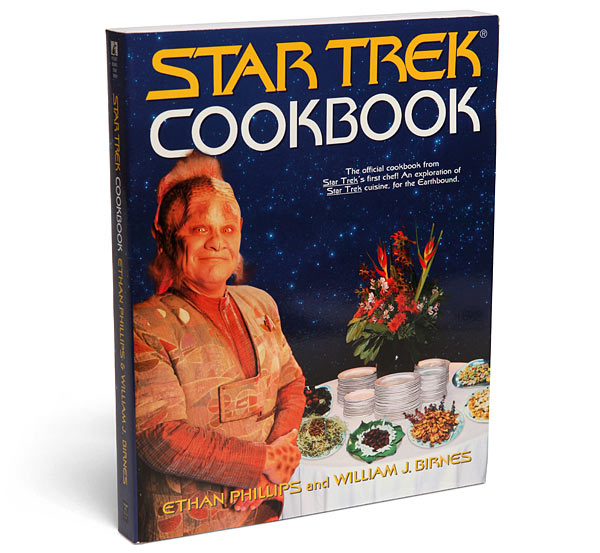 The Star Trek Cooking Manual is described as:

The recipes are generally for Terran ethnic food, albeit in some cases tweaked a bit to suggest non-Terran cultures.

The Klingon section is quite different from Klingon cuisine as presented in canonical sources; it also includes a description (but not a recipe) for a gelatin dish with bits of exceptionally pungent cheese floating in it, covered with a sauce described as resembling mint-flavored milk of magnesia.

The Star Trek Cookbook has the following description:

The favorite foods of characters from every Star Trek series and movie are here, all adapted for easy use in twentieth-century kitchens. The Star Trek Cookbook also features a complete guide for whipping up all the drinks served at Quark's.

These are the only two official cookbooks relating to the Star Trek universe.

There are a number of one-off receipes on the internet for people who invented their own versions for the more popular foods mentioned on the show, particularly Klingon. Here are a few examples:

There are some people on Youtube called Feastoffiction. They make food mentioned in various tv shows, books and movies, and seem to lean towards science fiction & fantasy themes. They take suggestions from viewers, so you might be able to ask them to do a recipe for you. They film themselves making the food so it's really easy to do yourself.

Not the answer you're looking for? Browse other questions tagged star-trek food or ask your own question.