I am looking for a cartoon, old one, with virtual reality?

I am getting nostalgic memories about a cartoon/anime that was in the tv when I was a kid, approximately 17 years ago. However lately I was thinking about it a lot and it got my attention, I would love to find out about it.

I only have some some scattered memories so I apologize for that.

They were kids/teenagers and they were using some sort of "hover boards" , which looked like two circles, one for each leg.

They were entering some kind of portals, they were always purple and in the shape of cube. The portals always came down from the sky. There was also "announcer" voice, saying when and where the next portal will be. They called the portals "games". The announcer always said something like "The game is starting in 10, 9, 8..."

In order to enter the "game", they had to stand underneath the falling purple cube. Once it landed, nobody else was able to enter, I think.

I do not remember what was their objective inside or the point of going inside the portals.

Also, they used some kind of flying object , I think it was in the shape of yellowish fish. In order to control it like steer etc. they had to press bunch of buttons in order to do it.

The "incoming game" motif - especially the description as purplish blocks - reminds me a great deal of ReBoot (1994) (link on IMDb). I'm pretty sure Enzo had a flying board like you describe (and maybe one for Frisket too). 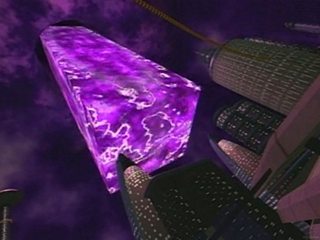 And a view of AndrAIa, Matrix, Enzo and Bob on zip boards: 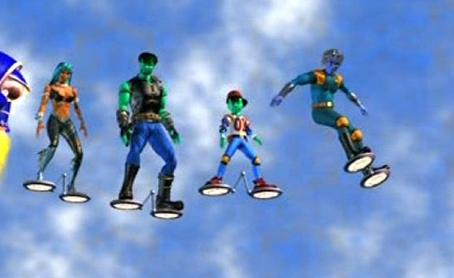 4
Trying to track YA novel - virtual reality simulation aboard an interstellar generation ship
10
In which movie/TV show do characters use a hand-held organic-looking creature to travel into a virtual world?
5
60s or 70s made-for TV sci-fi movie with brain washing and Japanese agents
9
Old heroic fantasy cartoon
7
Looking for surrealist/ridicule book about a boy with a wingsuit
7
Anime/cartoon with kids battling with robots in a game
3
Animated TV show about a boy working as a courier, set in a high-tech post apocalyptic world