I read a ebook story once, it was pretty short I think, but it was pretty funny. I think the cover had some sort of 8-bit type art on a white background but I might be wrong. I read it a few years ago but I'm not sure when it was published. Here's what I can remember;

And that's all I remember right now. Any idea what story this is? 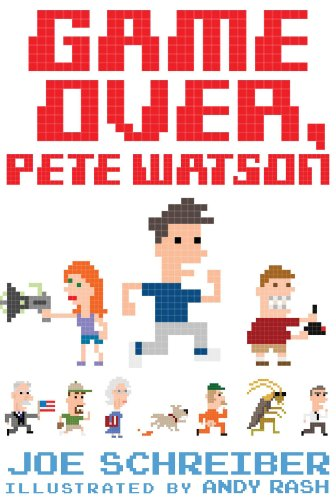 When videogame obsessed Pete Watson discovers his dad is not only a super-spy but has been kidnapped and is now trapped inside a video game, he has to use his super gaming skills and enter the game to rescue him. Will he be able to save his friends and family and the entire world from giant mechanical cockroaches and a massive cyber attack set to take down the world's network? And if he succeeds, who will save Pete from his massive crush on Callie Midwood?

This review mentions the salient details of the console sale and the president getting involved.

There was a lot to like -- a sort of mystery/adventure when Pete has a yard sale to raise money to buy the newest and greatest video game, which results in selling a special piece of equipment his dad uses that could have worldwide consequences -- even the President of the U.S. is affected! The conversational style made it easy to read. Pete Watson is writing it all down, and even says that the full electronic version will have clips and videos. It is accompanied by black and white hand-drawn kid-style illustrations as well. There's a fun flip book at the bottom as well.

6
Gruesome scifi horror B-Movie 1990s-2000s, similar premise to The Cube, except in a car park?
6
I'm looking for a book about inter dimensional travel
16
Young man hypnotized (willingly?) into thinking he was an alien
8
Does anyone remember this old “trapped in a video game” anime?
6
A fictional story about a kid who is crazy into clock work with tons of pictures
14
Post-apocalyptic story about a girl, her father and an alien attack
1
Manwha that opens with a protagonist evading a boss to mine some rocks and gets a really rare drop (possibly armor)
4
VR PvP game with space-like physics