How can the travel be followed in the control room?

In the control room of the SGC, there is a star map that can be used to follow the traveller through the wormhole, know where on the way they are, the destination of the wormhole and so on. I understand that this is mostly to help viewers to visualize the travel through the Stargate. But has it ever been explained what technology is used to get that information?

I think it's highly unlikely to be a built in functionality by the Ancients as the control room in Atlantis does not have such a star map (and why build in the functionality but not use it?). Humans IMHO do not have the technology to create such a functionality. 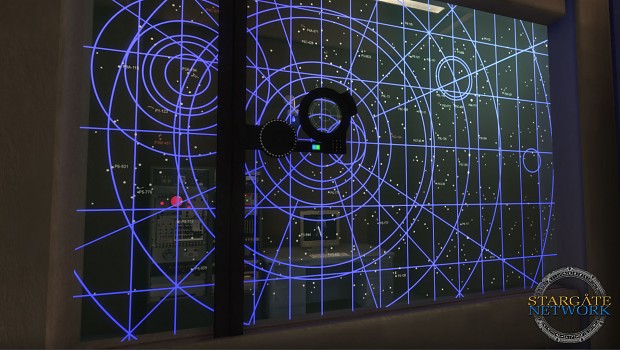 From the transcript of Stargate SG1, S2E16 - The Fifth Race:

SIMMONS Wormhole is tracking… (freaked out, then to Carter) Captain?

CARTER Sir, the computer indicates that the wormhole is leaving our known network of Stargates. It's going outside of our galaxy. Far out.

From S2E16 Transcript on Stargate Wiki

They were able to tell within seconds that the Stargate left the Milky Way (however, it doesn't seem to know to which Galaxy it's leading as otherwise, they'd probably had mentioned it). How is that possible?

The tracking system was a narrative device that was quietly abandoned when the film was adapted into a weekly television series. It made no "sense" as the movie indicated that Abydos, the first planet visited from Stargate Command (SGC) was located in another galaxy and not within the Milky Way galaxy as the later canon demonstrated.

During the episodes of the series, the SGC had created a system that allowed the gates that dialed "into" the various Earth gates to be tracked. This wouldn't track the travel of the users like the unit in the film did; however, it would indicate the location of most (although not all) "off-world activation points. This is best seen when Anubis (the Goa'ld who was half ascended) attacked Earth's Stargate from a gate whose destination was unrevealed. The system's efficacy was directly tied to the needs of the episode's narrative.

Ironically the tracking system screen itself was in the background of the mission briefing room set, although it was rarely used or acknowledged after the first season of the television series.

The dialing devices are not just simple user interfaces and power supplies. They calculate stellar drift, expansion of the universe, time dilation, and other gravitational effects that could effect the relative location of the destination gates.

The ancient dialers all have these capabilities unless tampered with, but SGC's dialer gets an update every time Sam discovers one of these problems, or Jack hacks it with ancient knowledge obtained artificially by a particularly gropy wall ornament.

Anyways, it's plausible that the dialer can detect the energy transmission sent from the dematerializing gate, and perhaps it also detects a confirmation of rematerialization from the destination gate. Since the stargates located in different galaxies have completely different glyphs and therefore completely different designs and dialers, it's plausible that the SGC dialer doesn't recognize the rematerialization receipt, or perhaps the intergalactic stargates weren't supplied with sufficient power to send the receipt that far. In other words, it might be an oversite in the initial design of the gates, rather than with SGC's dialer.

The Stargate network is a system of phone lines.

As many of us phone lines have the capacity to transmit a great deal of data, but the devices on the other end do mot necessarily have the ability to interpret all of that data. The DHD's are old school payphones. Make a call, receive a call. That's it. Cheap, long lasting, very little maintenance.

If you could create a program to dial into an alien phone network, then it also stands to reason that you could use some of that extra data present and display it. Especially something simple like spacial coordinates that are probably numerical. That's why they lost the signal once Jack was sent to the Asgard world. No longer had a concrete frame of reference, no stars no nothing. It would be like telling a computer to look in bin D14 when there are only 13 bins in its system.

12
How long can a fully charged ZPM be used to fire a control chair?
36
How does the Stargate Wormhole know whether it can close itself, or if there are more people coming through?
20
How did the Goa'uld develop interplanetary travel?
26
What happened to the 'freezing' side effect of gate travel?
18
How do the Replicators get to the Asgard galaxy?
7
How can the identification code be received before the wormhole is created?
19
How can there be more than 39 stargates when each gate needs a unique "point of origin"?
7
Is it impossible for Earth Stargate be modded to dial all Stargates?
13
How can the Jaffa see out of their cobra headgear?
16
Why are there so few ancient ships in the Milky Way?