Time travel book involving an agency that fixes the past, which is largely meddled with by strawman liberals

I read this somewhere in the last two years (2019-2020) as a Kindle EBook. I did not finish it, as the book ceased to interest me for reasons I'll expand on later, but recently it's been poking at the edges of my mind. The protagonist engages in a form of sex tourism involving traveling to a "bubble of time" in the past. Basically, time travel exists, and is readily available to consumers, but it's set up in a way where nothing they can do changes the future, in this case letting people have sex with famous people. Something about how he handles the situation impresses this agency, and they offer him a job in fixing malicious changes in the past. Apparently, when the time travel process was invented, the inventor found a way to change the past, but intentionally did not reveal it, other than maybe to this agency, who now uses it to police the time stream.

There are, I think, 3-4 people who are attempting to change their past for their own goal. I remember there being a fellow who claims to be a transexual Puerto Rican woman trapped inside a white man's body, a white man who seeks to change history so that black people are in charge to reverse the centuries of discrimination, and a guy who is just basically a sexist pig who runs some sort of cult that ensures that he can sleep with all of the attractive women. I think in that case, he was married to the person with the time travel knowledge, whom he was no longer as attracted to, resulting in her having joyless sexual encounters with the husbands of the women he slept with under the concept that they were "partner swapping". All of these people gained their access to time travel through assistants to the original inventor, who himself vanished at some point in the past of the book. I remember one of them (I think the guy who claims to be a transexual female trapped in a male body) did something involving the pilgrims such that he essentially arranged for them to be sold into sex slavery before they could get to the Americas, with the interlude having him woo an attractive widow and her young daughter only to revel in having them as slaves. The guy who hated himself for his whiteness goes to Africa and informs one of the tribes of the precious metals on their land and encourages them to enslave the white explorers, as well as neighboring tribes, to mine the gold.

The protagonist has someone he lost in the past, a buxom young woman that he met while at a resort (I think in New York) while on a business trip when she was his waitress. The resort had a trail that involved a lot of climbing up ladders before encountering a labyrinth and there were a lot of descriptions by the protagonist of how the girl filled out her clothing, and her brassiere barely contained her. She's dead at the start of the book (apparently part of the reason the protagonist was doing the temporal sex tourism), but we keep getting flashbacks of him making excuses to go back to that resort in between the time travel scenes. I don't think I ever learned exactly how she died, but I got the impression he received a letter informing him of her death, which left her actual fate somewhat uncertain. He is a white male whose other aspects escape me now. At the agency, there's a female operator of the time travel mechanism who is insistent that he will have sex with her, claiming that he's turned off by her being flat-chested now, but eventually he would crack (and I remember her being very aggressive in her insistence, either grabbing his crotch or forcing his hand inside her shirt). I only remember two of his missions. One was a standard test mission involving Amelia Earhart's disappearance, where I think he visits the tribe on the island where many people believe she crashed, and learns that she never actually existed, but was someone made up by a white man now living with the tribe on the island. I want to say the revelation had something to do with a broken jar of face cream? The other mission involved them trying to fix the situation in Africa and a woman working for the opposition gets the drop on him, shooting him with a tranquilizer dart. I think there was supposed to be sexual tension between them. I want to say there was another time when the same agent foiled him and, similarly, avoided actually harming him in the process.

I dropped the book when it became clear that the author was basically making all of his villains strawman liberals and that we were supposed to be on the side of the much more conservative agency not only ensuring that the past wasn't changed to fit a liberal agenda, but also to make small changes to ensure that the status quo would be even more stable, with white men on top. I have some vague memories that the time travel method opened up some sort of hallway that you walked down to get to the other time and there was a standing rule that if you heard someone address you in the hallway, you were not to answer because that was linked with agents disappearing. Due to their exposure to the time machine, the agents have a resistance to the changes in time. I remember one senior agent realizing there was a change when he woke up the next morning to find out that his wife has never existed.

One other oddity of the book was that they took advantage of the electronic format to embed URLs in short reports after the resort interludes with pictures supposedly taken by an investigator who was looking into the protagonist. After poking around a little with the pictures, I think I remember I found that they came from the actual website of the resort, which tempted me to try visiting because it seemed like a neat place.

I don't remember much about the cover other than that it showed the protagonist with a smirking grin, beside a woman who I think was only half-dressed, with an implication that this was one of his sexual conquests during the time traveling.

I recalled one more detail, that the opening bit with historical prostitution involved Eva Braun, and a search for goodreads.com sleeping with hitler's wife led to, well, Sleeping with Hitler's Wife by Gary L.M. Martin. 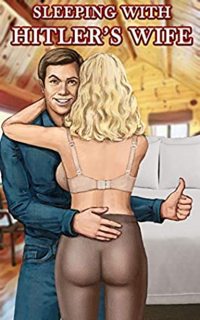 This is the most creative and imaginative time travel/alternate history story you will ever read. Slavery. World War II. The first Moon landing. They all happened... or did they?

Factions are fighting each other to change the timeline and decide the fate of mankind. And everyone wants John Calle, the man with the special gift of finding key focal points which can change the course of history. Calle is in mourning for his dead wife, Marion. But could the technology of time travel bring her back to him?

I didn't remember leaving a review, and it looks like my memory of my impression was accurate to my memory:

I wanted to like this story. The characters were interesting and it looked like they were going to explore some questions of whether the status quo was right. But then... well, the author's biases started to come out. The opposition, setting out to change the past for a better future, include a black White Supremacist and a trigender Hispanic in a white man's body who has somehow parlayed their proclaimed gender and race switch into a get-out-of-jail-free card for drunk driving. And the author treats this as a perfectly rational projection of where our society is going. I just couldn't make it past that point, which is a shame because the book was entertaining up to that point.

16
Looking for time travel book set in the 60s or 70s
22
Short Story with Time Travel separating the user from causality
5
Book where boy/girl teleport/time travel with device that uses mobius strip
5
Name of movie involving time travel with a ruby ring?
6
Book involving dimensional travel/time travel: a modern earthman has a relationship with a medieval princess
11
Time travel book series - Time agency alters humanity starting with the cro-magnons
29
Time travel to the crucifixion of Jesus and changing the past
5
Movie: in a big seaside city time travel portals open to the apocalyptic future with the fading sun and zombie mutants