Book featuring an encounter with a mind-reading centaur

I read this book many years ago, it has been plaguing me for like 12+ years.

It was definitely about a group of kids on a weird planet - for sure a girl and a boy. They definitely had some sort of magic stone or gemstone, and maybe they were trying to get more.

The only part I specifically remember is them encountering a centaur-like creature, and him reading their minds and being offended maybe.

Though the details are sparse, could you be thinking of one of the books from the Animorphs series?

It was definitely about a group of kids...

The main series focuses on a group of human children/teens with powers that allow them to "morph" (transform) into animals (hence Ani-morph) fighting an evil race of aliens called the Yeerk, which are essentially mind-controlling slug creatures.

The only part I specifically remember is them encountering a centaur-like creature, and him reading their minds and being offended maybe?

There are also good aliens called Andalites. They are blue centaur-like creatures that can communicate via "thought-speak". When the teens first meet the Andalite character Aximili-Esgarrouth-Isthill (or his nickname "Ax"), he is shocked that they were given the morphing power by another Andalite because it is forbidden by law in Andalite society to give advanced technology to other species.

They definitely had some sort of magic stone or gemstone, and maybe they were trying to get more?

The morphing power is granted by an Andalite technology called the "Escafil device", a small blue cube. It is thought to be destroyed at one point in the series, though the main characters are able to recover it later.

There are many books in the Animorphs series (over 50), and it's been a long time since I read them, but it is entirely possible they visit an alien planet at one point.

This could be the Diadem series by John Peel (not the famous DJ). This specifically sounds like Book 2, the Book of Signs. This is the cover I remember for it: 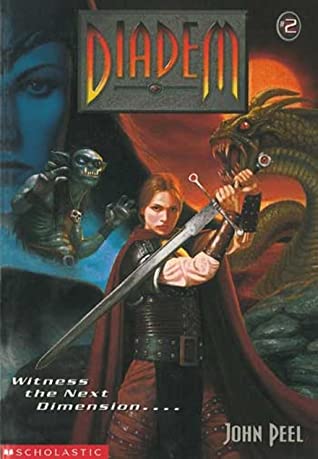 It does not match exactly but does have some similarities.

The linked Wikipedia article has a pretty detailed synopsis. Unfortunately, I do not have my copy with me. But the broad strokes of your question are there:

The Andalite Chronicles (1997) by Katherine A. Applegate was, I think, an offshoot of the Animorph franchise that I read as a kid.

His name is Elfangor-Sirinial-Shamtul.

An Andalite war-prince. The one who gave five young humans the ability to morph into any animal they touch. They are still out there, fighting an evil so powerful there isn't a moment that goes by when they can actually feel safe. Their story continues.

But this is how it all began.

The story that came before Animorphs . . .

The only thing I could remember was the blue centaurs that talked through their minds and ate through their hooves. I don't know if it ticks the rest of your boxes but I think this is the right book.

Not the answer you're looking for? Browse other questions tagged story-identification books young-adult centaurs or ask your own question.

7
Book featuring magic headgear and death by cats
15
80s (or earlier) book with children who have magical powers imbued by wearing stones around their neck
8
Science fiction anthology, possibly called Monsters (or Creatures or Dragons)?
3
80s or 90s movie with evil genie and kids?
13
Fantasy/magic book with female protagonist and a misogynistic villain in a ringed city
8
2000s (or earlier) novel featuring a fantasy creature with an overwhelming obsession with chocolate
9
Child's science fiction book about kids in space with a metal disk and an alien chasing them after it