The view had the enemy ships scaling as they approached you, I think.

The ship you controlled seemed to be in some tunnels, or more appropriately named, corridors of either a large ship or space station? The corridors (in light blues and light greys) would occasionally curve. Also I recall the game was always in the corridors, there was no open space part.

I thought Astron Belt might be it, but it seems like that game is mostly in open space and the corridors are at the end. It's definitely not R-Type.

Planet of Zoom was a good arcade game. It wasn’t great, but neither was it rubbish either. If you had a spare 10p coin in an 80’s arcade then you could do worse than feed it to this machine.

It had a great controller. A big joystick/aeroplane type stick, with light up buttons. Controlling Buck’s ship was a dream. It looked a bit fragile, but it seemed to hold up to the punishment you dished out to it.

Sega’s game predates After Burner by 3-4 years, but was clearly an influence. You have a back view of your ship, and you hurtle across planet’s surfaces and through trenches (a la Star Wars). The graphics are generally good with big sprites for both you and the enemy. If there was a criticism then it’s that they are a bit gaudy and migraine inducing, but you can’t have anything. 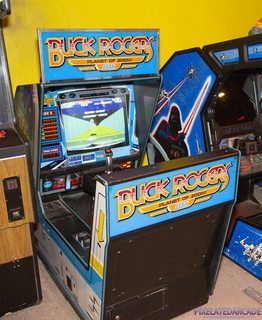 4
CoCo 2 Fantasy Computer Game - Real-time, puzzles - Had a sequel
8
Seeking a game like Hunt the Wumpus but with graphics, RPG elements, and a balrog
7
Arcade Game with network-like enemy
14
Space exploration/RPG PC game where humanity is trapped in a space bubble
4
Game identification: flying shooter on PC from early 2000s
11
Game with inherited space station