1990s Video Game (I think on the Sega Genesis) where you controlled a gun-sight which you used to kill monsters, primarily by blowing their limbs off

I never actually played the game, but I remember Video Games and Computer Entertainment noting it as a notorious gory game at the time. In middle school (around 1992ish), I remember a friend of mine claiming he had a copy of it for his Sega Genesis, but that it was in storage. He did have a lot of video games, but he was also prone to telling tall tales, so it may not have been the truth. I remember screenshots from the magazine showing dragon, I think flying in the air, with the cursor over a leg, and a massive splash of blood, presumably from the leg being removed by sufficient firepower. The background was kind of a generic fantasy out-door setting with some green trees, and mountain ranges along the edges, and the dragon in the sky close to the center of the screen.

The game was 2-D, raster graphics, and at least from the description and screenshots, seemed to consist of entirely "boss fights" against larger enemies.

I really don't remember much else other than the plot essentially being killing those monsters, the approximate timeframe, and that it was notably gory at the time, but I've remained curious over the years, and it recently came to mind.

I think I have found it. Death Duel by Razor Soft. 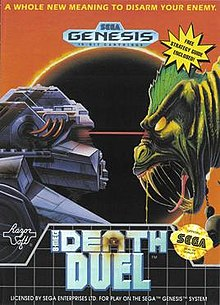 Death Duel is a First person perspective scrolling shooter developed by Razor Soft for the Sega Genesis in 1992. In it, players have to strategically shoot nine alien enemies one at a time using all the weapons they could afford.

Story
Taking place in the future year 2140, the nine of the ten Galactic Federations had gained unwarranted control over galaxy flight traffic and territory. This has caused the one remaining Federation to suffer a loss of supplies and space pirate attacks. The dispute can only be settled through a warranted duel with the Federation's one duelist to fight against the collective nine alien duelists representing the nine Galactic Federations in control of the space traffic ways, otherwise known as The Super 9's. The player assumes the role of Barrett Jade, a mecha pilot to win back the space ways and duel against the nine other duelists.

Gameplay
Players started the game off with their first duel with a set number of ammunition for their weapons; the player's robot had a total of three weapons indicated by all three buttons on the controller. Once the player completed the duel, they would go through a type of Bonus Stage that would qualify them for the next duel as well as increase their score and money. Players could then purchase more ammunition or even new weapons for their robot at a local shop. Players had to time their attacks and aim precisely for key locations of their opponents body. Some enemies could regenerate missing parts of their body (including their head) while some enemies depended on particular mechanical parts to evade fire. If the player ran out of ammunition for all their weapons before the duel was over, they would lose a life and restart the duel over (with the same amount of ammunition they started the duel with). If the duel timer ran out before the duel was over, the player would also lose a life and restart the duel.

As often happens, my memories are much more impressive than reality. 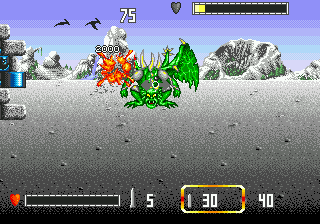 Playthrough of the game

This review gives a pretty decent rundown of the gameplay, and apparently the controversy about the game was largely a marketing tactic.

I love the old magazine ad for this game. It depicts a white box with an official-looking notice: "Contrary to published reports, Death Duel has been banned only in certain European countries; however, it is still legal in all 50 states as of the date of this notice. Any reports indicating otherwise are unfounded." That's pure marketing hype for you. Yes, there's a certain degree of blood and dismemberment, but these are pixilated monsters for Pete's sake. Still, the box does state, "Not suggested for children under 13."....

I don't have a clever story for how I located the game. I basically went to the Wikipedia list of Genesis games, sorted it by date of North American Release, and started scanning it around 1993 down. With a half a dozen tabs already open to look at, I saw the snippet of Death Duel when I hovered over it and it was a match. I wish I'd thought to do that before rather than trying to Google it with various terms to eliminate the non-matches.

7
Arcade Game with network-like enemy
4
Early IBM PC sci-fi RPG with a girl in a shower and an optional dragon encounter
7
PC Game (DOS?) with crude 3D sphere graphics, ability to play a male or female against creatures in a European town
6
Early 2000s sci-fi game which begins with a castle being attacked and forcing the player underground; it had jet packs and futuristic weapons
6
DOS Go/Othello/Reversi clone with creatures/monsters like Snowmen instead of stones
3
Tandy CoCo 2 game that replicated the Death Star trench run, maybe also landspeeders on the Endor moon?
9
Sega Genesis game where you coached a monster that fought in tournament battles. After fights, you could blend your monster with the opponent