What young adult SF book is about a boy saved by aliens and domed colonies?

When I was younger (lets go with probably about 20 years ago), I read a f/sf book that I've been looking for ever since, but I can't for the life of me rediscover it. It centers around a boy who is rescued from (I believe) a flood, by aliens, who take him to a sort of a domed colony, populated by other humans saved from disaster. The setting in this domed colony is more or less suburban, but there are robots that are considered caretakers, that keep it running, etc. (and actually, it turns out that the robots are the only ones left, and that their creators are not extant).

Over the course of the book, the boy travels to similar domed colonies that house other alien species. In one, he comes across (this is a little fuzzy in my memory here) a fruit that enables transmogrification, which is used in an alien ritual of some sort.

The only other detail I can recall is that at the climax of the book, this fruit is used to become one of the robots' creators, in order to break into some sort of control center.

This has been bugging me for the better part of a decade - hopefully somebody here is familiar with this book.

I did a bit of Google searching and found the following answer posted by user sallievern on whatsthatbook.com:

Journey to Terezor by Frank Asch 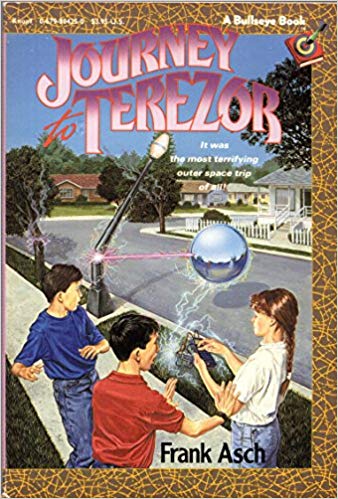 Matt and his parents are rescued from a flood by alien robots who have set up colonies of intelligent beings from various worlds on Planet S-15. Matt joins two other children, Sarah and Ryan, in an attempt to reprogram a robot to get them back to Earth. Sarah and Ryan are caught, but Matt escapes to another colony and lives with the alien Dar for a while. Cyber, the robot, returns for him; they rescue Sarah and Ryan and set out for Terezor, the original planet of the robots. There, Matt changes his body to that of a (now extinct) Terezor and reprograms the master computer.

2
Collection of stories about young boy and his brother encountering aliens in suburbia
5
Looking For an Early 2000s Young Adult Book Involving a Human Boy Raised by Aliens
8
What is the title/author of this obscure SciFi book where aliens sell coffee?
9
YA SciFi moon colony story
7
Trying to find a book I read ages ago about telepathic aliens on a colony world
5
Young adult book about a girl who goes to live with her dead mother's people, who are aliens
6
Book series about a boy who has a scroll in a graveyard and accidentally summons a sort of dragon thing
5
Picture book with various information about aliens, including an adventure gamebook style section
7
Short story about a young boy who lives alone in a room and is actually under observation by aliens?