How come General Kenobi is at two places at once?

Star Wars: Episode III - Revenge of the Sith - When Obi-Wan Kenobi goes to the planet to fight General Grievous alone, shortly after he arrives he is in two places at once. He is sitting back in his ship talking to his droid before leaving... 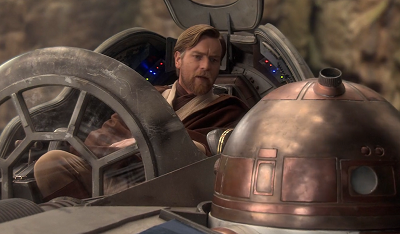 ... and yet seconds later, he appears to have never left the planet and is watching his ship take off. 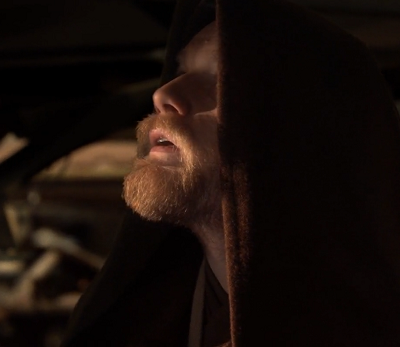 Can this be explained?

The junior novelisation indicates that he exited on the side facing away from the landing pad observation, then presumably made his way along the underside of the platform where he could remain hidden.

He cut the signal, then gave a few quick instructions to his R4 unit and slipped out of the starfighter on the far side of the cockpit. By the time the fighter took off, he was hidden in the shadows at the entrance to the sinkhole city. Now all I have to do is get to the tenth level and defeat Grievous.

You're not wrong that it's a weird cut though.

19
What was Dooku's plan for the Battle of Coruscant?
16
How did Anakin and Obi-Wan intend to rescue Chancellor Palpatine?
23
How could the fireships in RotS know that Grievous' flagship was crewed by friendlies?
9
Why do the forces of the Republic attack Grievous' ship in RotS even though they know that Palpatine is aboard it?
2
Where did General Grievous hide his starfighter on Utapau?
3
Did Rom Mohc fight in the Battle of Utapau?
8
How wide and deep was the Pau City sinkhole?
8
Why didn't General Grievous intervene during the fight of Darth Tyranus vs Anakin Skywalker and Obi-Wan Kenobi?
25
Why does General Grievous say “Ah yes, the negotiator?”
6
Where exactly was Obi-Wan going?