Why does Georgiou complain about orange on the Enterprise bridge when there is none?

In DIS season 2 episode 13, when Captain Georgiou walks onto the bridge of the Enterprise, she says

But I see no orange anywhere in that scene. What am I missing here?

She's talking about the rails, the console backs and the doors, which were in fact more red than orange even on the original sets, but sometimes looked quite orange with 1960s lighting and cameras: 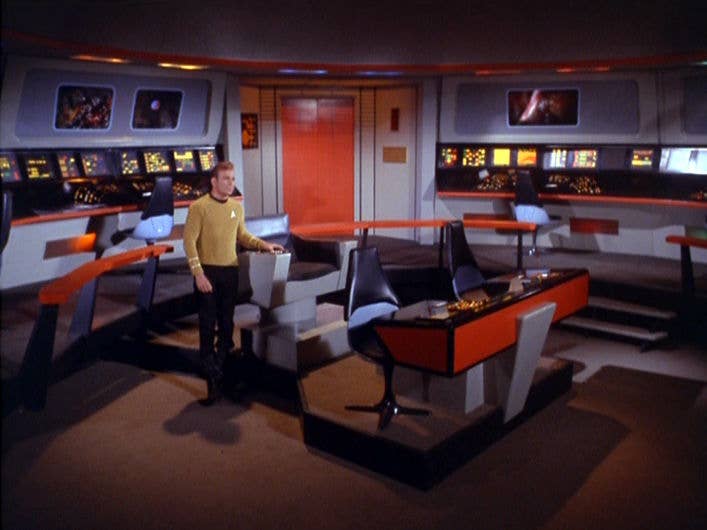 There's an interview with the production designer responsible on the Star Trek official site here , from which the most relevant sections are perhaps these:

Then, I really wanted to color-code. So, I was playing a lot with the colors of the Enterprise. There are actually variations [of the red-orange] in the Enterprises . That's very distinct, and I went through the archives at CBS to look at those colors and try and match them, but in a new way.

We couldn’t help but laugh out loud when Georgiou walked in and complained, “Orange? Really? Ick!" Was that scripted, or ad-libbed by Michelle Yeoh? And, either way, what was your reaction?
TD: That was scripted. The Enterprise had different colors. They changed it over time. The way it was lit, sometimes it looked really orange and sometimes it looked very red. The orange we’d picked, which was the original orange, was really red. [So] I actually went to the writers and said, "I'm uncomfortable with this line." I did this whole layout of the different oranges and the red we decided we were using, and all of that. We had powder-coated this metal in this red, so there was no going back. I went on and on and on. Alex Kurtzman wrote back, saying, "This is why we love you, Tamara. It's okay. We're gonna say orange. It's okay, don't worry." It was just a funny story. I loved Michelle’s line, but to me, like any production designer would think, it was all about, “Do I have the right color?”

So the ultimate answer may well be 'it's a partial in-joke that you're not meant to think too hard about".

Not the answer you're looking for? Browse other questions tagged star-trek star-trek-discovery uss-enterprise or ask your own question.

20
Does the bridge crew on the Enterprise NCC-1701 have the ability to see through the ceiling into space?
17
Where did the original Enterprise bridge sounds come from?
7
Why does Cpt. Georgiou refer to her first officer as “Michael” instead of “Commander Burnham”?
4
Why does Michael Burnham not regain her insignia badge when she joins The Discovery?
11
Did Michelle Yeoh do her own stunts in this scene?
8
Have USS Enterprise and Captain Pike done anything remarkable by year 2257?
4
Is the mirror Captain Philippa Georgiou a member of Starfleet?
3
Is mirror Georgiou the only one to use the name “Prime Universe” for the prime universe?
4
Why is this character not in the brig?
5
What am I expected to already know about Captain Pike?