I read a comic book(s) some time after 2010 where there were these god like entities that would travel from planet to planet in some type of spiritual or energy form. They would download (?) into a person on that planet and takeover the body of that person transforming into whatever Justice League analog they were (Superman, Wonder Woman, Flash, etc) The two most powerful ones were the Superman and Flash analogs. They arrive on earth. They've possibly been here before, not sure.

The Flash analog doesn't finish downloading or something goes wrong during transfer, so his mind isn't controlled fully by the evil entity. Only his powers fully transfer. The evil JL start taking over the earth. The JL analogs are all afraid of the Superman analog. He threatens them on occasion. The powers that be mount a desperate offensive and manage to kill a number of the evil JL's. Superman analog exacts vengeance on the resistance and maybe the whole planet for daring to touch them.

At some point the Flash analog decides to oppose the evil Superman, who laments that he knew something was wrong with the Flash analog and that he should've killed him immediately. The Flash analog ends the fight by grabbing him and running around the world accelerating to light speed and body slams him into something killing them both. At the end we see that the spirit/energy form of one of the analogs (Superman?) has transferred to another planet where a humanoid species is worshipping him. He says or thinks something like the next time he comes to earth he'll extract his vengeance.

Sorry, I don't have any more details. That's all I recall about it. The story wasn't very good, but I wanted to see it again for some reason.

I finally figured out what this was. Not sure why it stuck with me, since as I said it wasn't very good at all. In fact it was worse than I remembered, which is probably why I couldn't remember all that much about it. However, if some are interested in it, the story is E.V.I.L. Heroes: 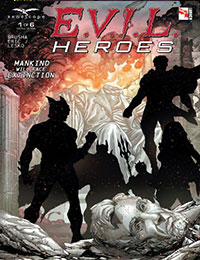 With great power... comes great corruption. Superheroes are real. They walk the earth as gods among men. But the fairy tales of them protecting mankind and being heroes were all lies. Humans have become their slaves, fit only to serve their super powered masters. But in man the nature of the true hero still survives...and one group rises up to challenge their self-appointed masters. Can they hope to succeed or will their opposition only push mankind closer to extinction.

16
Book about aliens who attack Earth and destroy the Sun
7
What's the book title: woman fleeing from earth, war between liberal colony and earth
6
Trying to find a book about aliens taking over earth and making us fight with them
6
I need help finding the title of a Sci fi book about psychic aliens on a forsaken planet
6
What is the title of this book about aliens deep down in a mine?
6
Sci-fi series where humans are reduced to a mathematical pattern and sent to another planet
3
Identifying a Superman Elseworlds comic where the Kyptonians take over Earth
3
Justice League comic where the Arkham Asylum gate is locked with a Kryptonite chain
6
Spinoff / Alternate Universe of DC Comics involving mother earth rising up?