80s or 90s postapocalyptic cartoon where a group of kids traverse a wasteland searching for sages? [duplicate]

I have a vague recollection of a cartoon I saw sometime in the late 90s. As Scandinavia was a bit behind in releases back then I believe it was broadcasted in early 90s or late 80s in its original run. The animation style is similar to that of Spider-man the Animated Series from the early 90s and Highlander the Animated Series.

The premise of the show is similar to Highlander the Animated Series series, but with a more gritty tone. The world has been plunged into a radioactive wasteland after a nuclear war, I think, or some other catastrophe. A group of kids/young adults traverse wildlands looking for "sages" that has preserved the old world knowledge.

The one scene I remember vividly is when the group encounters one of the "sages", the one concerned with atomic/nuclear power. The sage removes his cowl to show a face scarred by radiation, this is never shown as his face is never seen but it is implied. After he has given his knowledge he sends the group away and activates some kind of self-destruct sequence, an atomic explosion follows.

The purpose of the group I cant remember but it was similar to that of Highlander, overthrowing a tyrant.

Does any of this sound familiar or have I gotten it mixed up with Highlander? It was 25 years ago so it is not unlikely.

I'm pretty sure you're thinking of Highlander: the Animated Series.

You're describing Promethus from the 11th episode of the first season, Fallout

Prometheus is a Jettator who appeared in Highlander: The Animated Series. He is the Jettator of atomic power and energy as well as how such power could be used in weapons. He lived in an old military base but atomic fallout deformed him, and because of his immortality he couldn't die and escape his pain. He was even willing to surrender his knowledge to Kortan if it meant escape from his torment, but ultimately passed them on to Quentin instead. He showed his face to the young immortal to show him the true horror of atomic weapons, then self-destructed the base with himself inside to keep it from Kortan's hands and finally escape his pain.

Indeed, his face is not actually shown except to Quentin, but it is implied to be terrible. Kortan says that he has been turned into a monster and the shots of his arms show them warty and disfigured. 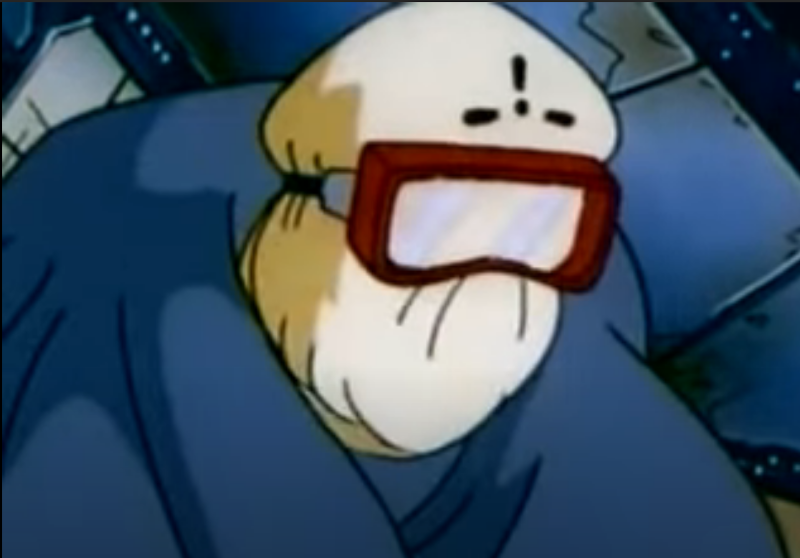 A series similar to Highlander: the Animated Series is Chris Colorado, the answer to this question. 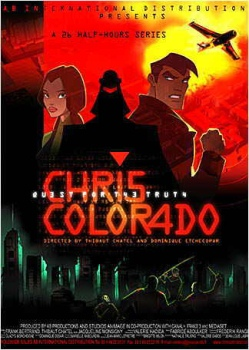 Chris Colorado takes place on an apocalyptic future Earth. After a data-processing bug prevents mankind from detecting the fall of a meteorite, it results in the destruction of nearly all life on Earth in a massive disaster later known as The Great Crash. After some time, many groups of survivors gathered together to try to rebuild and create a newer, more peaceful society, and formed "The World Federation". After several decades of peace, a mysterious dictator called Thanatos, a human wearing a helmet to conceal his face, with an army of humans converted into cyborgs called Thanors, started The Mega War, which ended with Thanatos taking control of Europe. However one group, "The Centurions of Freedom", led by Commander Richard Julian, succeeded in striking back and defeating Thanatos, who seemed to take refuge in what remained of Glorious City (Earth's first world capital, now mostly destroyed by the meteorite) where a strange black liquid from the meteorite, now called "Dark Torrent" by the Centurions, enabled him to recruit a new army of Thanors out of the survivors still living in the ruins of the city and start a constant skirmish-war against the World Federation.

The story begins with a former soldier named Captain Chris Colorado, a sporting, intelligent and world-weary soldier, who is recruited by World Federation Commander Richard Julian, who proceeds to reveal to Chris that he is the son of William-Erwin Krantz, a famous member of the Centurions of Freedom charged to infiltrate Thanatos's army and gather information but went missing and presumed to have defected to the enemy. This had left many, including Chris himself, to despise him as a traitor. Though initially reluctant, Chris accepts the job as Julian's primary secret agent in the war against Thanatos because of his need to search for the truth. This will involve Chris in increasingly dangerous adventures where various meetings with mysterious individuals will reveal the truth to him about his father, his family and the shocking secret behind The Great Crash itself.

It has a post-apocalyptical scenario, and involves a team traveling the wasteland to seek out knowledge from before the fall, opposed by a dictator, but they're not kids.

Not the answer you're looking for? Browse other questions tagged story-identification cartoon post-apocalyptic or ask your own question.

3
90s/80s Cartoon with rebel helper robots resembling transformers?
3
looking for a sci fi cartoon (american) from late 80s early 90s
3
Looking for a comic with a jester, the Grim Reaper and a rose
7
What animated Batman movie had an old Bruce and young female Robin?
2
Horror with a decapitated blue head in a chair?
10
Cartoon from the 80s or 90s about a dream master?
10
Space cartoon from the 80s or 90s
26
Futuristic Cartoon from 80s-90s