Why does Boba Fett not take Chewie in for his bounty when taking Han Solo?

At the beginning of Return of the Jedi, Leia, disguised as a bounty hunter, takes Chewie in for the bounty at Jabba's palace.

Why did Boba Fett not take Chewie at the same time as he was taking Solo (frozen in carbonite) back to Jabba?

Because his employer (Vader) wanted him.

VADER: He's all yours bounty hunter. Reset the chamber for Skywalker.

VADER: Good. See to it that he finds his way here. Calrissian, take the princess and the Wookiee to my ship.

Since Darth has no further use for Solo beyond torturing him to get Luke to the planet ("They never even asked me any questions."), he seems willing to let Boba Fett have him, as a secondary reward for his good work.

I actually remember discussing this in the interval between the releases of The Empire Strikes Back and Return of the Jedi. We inferred that there was probably a bounty on Chewie as well as Han, even before that was explicitly confirmed in Episode VI. So why does Boba Fett only take one of the two back to Jabba the Hutt? I think our conclusion then—and it's still the best explanation today—was that the bounty for Solo was so much larger than the one for Chewbacca that taking the wookiee along was probably not worth the extra cash.

Authors of later extended universe material (who may have had this very issue in mind), have indeed placed the bounty on Han much higher than the one on Chewie. From Return of the Jedi, it appears that the announced reward for bringing Chewbacca in was 25,000 (although that was also evidently negotiable—at least for Jabba's kind of scum). This wanted poster shows a specific bounty of almost ten times the 25,000 figure for Solo.* 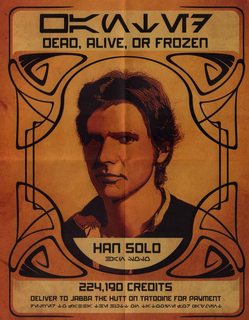 The source for the number is apparently Star Wars: Absolutely Everything You Need to Know. Moreover, the bounty from Jabba is not the only reward Boba Fett received. Even before he takes Han away, Boba Fett has already been paid by the Empire for locating the Millennium Falcon on Bespin. The viewing audience does not get to see all of the discussions between Boba Fett and Darth Vader, about how much the bounty hunter gets and who he is allowed to take into his own custody. However, Vader has probably already paid out an amount comparable to how much Boba Fett expects to collect from Jabba—leaving the bounty on Chewie as little more than chump change.

*This wanted poster is presumably a joke and not meant to be a literal in-universe document, for any number of obvious reasons. I doubt that, even on the relative fringes of the Galactic Empire, private bounties were openly posted for Imperial law enforcement to see. Moreover, it seems extremely unlikely that anyone had considered the possibility that Han Solo would be brought back to Tatooine frozen in carbonite. And, most egregiously, the poster says bringing Solo back dead would be fine—which Boba Fett specifically states is not the case in The Empire Strikes Back: "He's no good to me dead."

Fett is just trying to quit while he's ahead. He can see firsthand just how terrible an idea it is to try haggling with Vader. So he makes the smallest request he can that turns a profit for him, and as long as Vader looks like he's sticking to the terms of that deal, he doesn't ask for more. (The one time he does object, it's when Vader is putting his prize bounty at risk.)

After all, which would you rather have: one bounty and a clean getaway, or two bounties and Lord Vader angry at you?

Lando's deal was initially to use Han and co as bait for Luke. When Vader later talks about freezing Han and giving him to Fett, we get this

Lando: What about Leia and the Wookie?

Vader: They must never again leave this city.

Lando: That was never a condition of our agreement, nor was giving Han to this bounty hunter.

Vader (threateningly): Perhaps you think you're being treated unfairly?

Vader backs off the deal with Lando step by step. It's a careful and meticulous ploy. Rather than simply showing up and demanding Lando help him capture Luke, turn over his two friends and the princess, Vader first uses the latter three as bait with no other cost. Then he 'decides' to freeze Han to test the industrial carbonite chamber, and give him to Fett. Next it is Leia and Chewbacca have to stay in Cloud City. Finally Vader demands Lando hand over the last two. Which triggers Lando to rebel, but only after Vader's plans are mostly complete.

If Vader had just demanded all of that from the beginning, there is little chance Lando would have gone for it, he might have fought back from the start.

And for all we know, Vader might have given Chewie to Fett after they left (if Lando had handed them over). Or he might have had a use for Chewie. As a bargaining chip with Jabba or the Wookies, for example.

87
Why does Darth Vader stop Boba Fett from shooting Chewie in The Empire Strikes Back?
39
Why does C-3PO speak to Jabba in Basic/English?
24
Why was Boba Fett still hanging around with Jabba?
19
Why was Boba Fett considered the greatest bounty-hunter in the galaxy?
28
What language does Leia speak when disguised as bounty hunter Boushh?
54
Why is a living creature being frozen in carbonite in “The Mandalorian” so common when it seemed so risky in “The Empire Strikes Back?”
11
Did the terms of the bounty on Han Solo change between “Star Wars” (1977) and “The Empire Strikes Back” (1980)?
7
Whose idea was it originally to capture Solo and use him as a bait to trap Luke?