Which Star Trek species has had the longest real-world gap between canon references?

With Discovery bringing back the Talosians and Lower Decks bringing back the Pakleds, it occurred to me that Star Trek sometimes goes quite a long time without any mention of a particular species, only for them to reappear decades later. I'm curious as to what the longest gap in appearance is for any Star Trek species in canon sources.

Being mentioned or unambiguously alluded to counts as an appearance; the species does not need to appear "in the flesh." The gap is measured in real-world days between the release/broadcast of the films/episodes, not in-universe time between the events. Behind-the-scenes material such as cut footage, script iterations, DVD special features, or other production material that does not appear on screen in canon does not count.

For example, the Talosians appeared in TOS: The Menagerie, Part 2, originally broadcast November 24th, 1966, and did not appear in Star Trek again until this little guy: 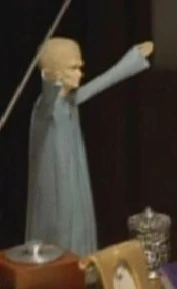 The references to the Pakleds and Talosians in the shooting script of Star Trek: Nemesis do not count as none of these ideas made it into the final cut.

So the Talosians are the current reigning champs. Who, if anyone, can beat them?

Edit to clarify, I consider all officially licensed film and television productions to be canon, including Lower Decks and Short Treks. No novels, video games, or other media, and no un-licensed works.

Not the answer you're looking for? Browse other questions tagged star-trek aliens time or ask your own question.

12
Are There Levels of Canon in Star Trek, Like in Star Wars?
16
Could any Star Trek species see the Q Continuum, and the Q, as they truly are?
37
Which actor appears as the most different species in Star Trek?
21
Which ship has the most prolific “recurring” role in Star Trek?
23
Which character in Star Trek has been played by the most actors?
11
What Star Trek humanoid species has the longest natural lifespan?
17
Do the Changelings (Founders) appear outside of Star Trek: Deep Space 9?
5
What TV show has had the most actors appear on any of the Star Trek movies and/or TV series?
9
Are Tribbles sentient / have a civilization?