Does Odo have eyes?

I was watching the Star Trek: Deep Space Nine episode, "The Alternate", wherein Doctor Mora and Odo were reminiscing about when Odo was a young blob, and Odo said something about seeing (first sentient life I think).

Dr Mora corrected him saying that he didn't have eyes at the time so he couldn't "see".

But that got me thinking that it was a sort of odd comment because of course he doesn't have eyes now either, or does he? I understood he just shapeshifted to look like he has eyes... Dr Mora even commented on his inaccurate ears... it seems hard to believe he couldn't get the basic shape of ears right but could manage the fine intricacies of a visual system...

Does he have eyes? If not, how can he see? Or what changed about him that he can see now when he couldn't as a nipper?

I've seen every episode of DS9, and I'm pretty sure Odo's mechanism of vision was never explained within the series itself. Having done some checking, I was also unable to find any clarification from alternate official sources, only guesses and speculation.

So unless there's something I've overlooked, there appears to be no definite, canonical answer to this question.

As far as speculation goes, Odo is likely capable of replicating the functionality of real, humanoid eyes. Other Changelings could apparently mimic humanoid physiology accurately enough to fool sensor scans (DS9: "The Adversary"). They must also be able to differentiate between colours about as well as humans can, in order to convincingly mimic the skin, hair and garb of various humanoids; for example, Changelings have successfully mimicked the appearance of Admiral Leyton (DS9: "Homefront"), Chief O'Brien (DS9: "Paradise Lost") and Dr. Bashir (DS9: "The Adversary"), uniform colours and all.

Changelings are also clearly capable of reading text and interpreting visual displays, as Odo has been shown reading PADDs (DS9: "Indiscretion") and piloting a runabout (DS9: "Treachery, Faith and the Great River").

Odo has stated that he has no sense of smell (DS9: "If Wishes Were Horses") or taste (DS9: "Meridian"), but perhaps he invested more time and effort into perfecting the functionality of humanoid eyes, since sight is more important to the life he leads than those other senses.

It also seems likely that Changelings have some means of perceiving their surroundings when not in humanoid form. They've been shown to navigate through ducts in gelatinous form on a few occasions, and Laas could navigate through space while in the form of an organic vessel of some kind. Laas could also apparently hear and respond to his name being called out by Odo while in the form of a blanket of fog on the DS9 Promenade (DS9: "Chimera"). And Dr. Mora's dialogue in "The Alternate" clearly indicates that Odo could perceive his surroundings to some extent, even as a "shapeless, viscous mass of fluid". In fact, we saw evidence of this first-hand, when an infant Changeling in gelatinous form appeared to 'look' first at Odo, then Dr. Mora, then back at Odo again, before briefly imitating Odo's facial structure (DS9: "The Begotten"). 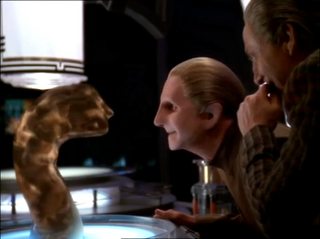 When being a blob, Odo has a different type of perception, which is not the same as "seeing"

The relevant quote from DS9: The Alternate reveals that Odo can perceive his surroundings, which, for the lack of a better word, he calls "seeing".

ODO: It was a dilemma for me. I had never seen anything like these creatures either.
MORA: Seen isn't really an appropriate description. He had no eyes per se.
ODO: I was just trying to describe it in simple terms.
MORA: He had never perceived anything like us before. Go on.

So we know that it's not "seeing", per se - but we also know that its not "nothing". In fact, we do know from several episodes that Odo can shapeshift into anything and still perceive his surroundings, as he did multiple times for instance with Quark.

When not a blob, it seems that he uses his eyes for actual seeing

Speaking of Quark, here is an example where Odo is in his human form. It seems that he notices something while his eyes are glancing at his surroundings, then he does a double take and changes the position of his eyeballs to get a better look at what is going on:

In general, it seems that when in humanoid form, his attention is always where his eyes are looking, and we see him turning his head to get a look on things.

In conclusion, it seems that as a blob, he "perceives" his surroundings, but he needs his "eyes" in humanoid form to actually see something.

The mistake is thinking that the humanoid eye, or any creature's eye in fact, is particularly good. In fact contrary to William Paley's opinion, eyes are a pretty crap design, and as such they're a great example of how "just about good enough" is generally where evolution lands. Eyes are a miracle in the same way as the results of Junkyard Wars are a miracle - the miracle is that it works at all, not that it works well. That's why visual tricks are so effective, because so much of what we "see" is actually our brain filling in the gaps with rather low-quality images. Saccades, blind spots, varying colour responses, bad response to rapid changes in brightness, inaccurate focussing, and so on.

If you aren't limited by this and you can reshape everything yourself, life becomes way easier. You can fine-tune the shape of the eye. You don't need the horrendous bodge-job of cornea and lens - instead you can just use one accurately-grown lens which you can reshape dynamically as needed. You can fine-tune your retina shape, or whatever you project the image onto, and choose the resolution.

And even if you're starting from nothing, the evolution of the eye shows that if you start with a basic ability to sense light and dark on a flat area, it only needs trivial trial-and-error to reshape that area in ways which first produce "pit eyes" and then pinhole cameras, and this has been demonstrated with software simulations. A lens is harder to come up with, but if your natural substance is a thick liquid with some refractive index (as Odo is) then a simple droplet makes a good first lens which again can be refined very easily. Every step of improvement is clear, and would be obvious to Odo when he did it. A few hours of tinkering would be more than enough time.

This even feeds into why he'd have deeper eye sockets with dark areas around them. These reduce lens flare, in the same way as a camera's lens hood. Human tribes living in snowy areas did the same thing by painting wood ash around their eyes. (Again this provides a counter-argument to Paley by demonstrating that intelligent design would produce something better, because the scope for improvement is obvious.)

The only mystery for Odo is that he's limited himself to two eyes. Flies manage to assemble a wide-angle image from multiple eyes, so there's no reason Odo couldn't do the same in principle. Out of universe, of course the reason is clear. :) In universe, we have to assume he's chosen that limit to avoid upsetting the various binocular humanoid species he's living with.

Regarding his ears though, Dr Mora is making the likely-incorrect assumption that Odo would want to accurately recreate human ears. The human ear shape is basically a crappy compromise between all-round hearing and directionality. Without all the various strange folds and flaps, Odo could easily fine-adjust its shape so as to focus sound from wherever he wanted to at that time. Again we have to ask the question of why Odo would choose to emulate the humanoid ear shape and not, say, dogs or owls, and again we have to assume that this is him choosing limitations which help him fit into society. In the world of Star Trek where there are many humanoid species with slightly different shapes, he doesn't have to perfectly emulate any one species - he just has to look "normal enough" to not obviously stand out.

15
How can Odo speak?
10
Does Odo lose consciousness when he goes into his bucket?
7
Why did Quark have different skin coloration around his eyes?
5
How does Odo copy someone's/something's form?
10
What does the Klingon say to Odo?
6
Where does Odo fit in the chain of command?
20
How “old” is Odo?
25
How does Odo gain energy?
7
Why didn't Odo arrest Kira?
5
Have we ever seen Odo impersonate another humanoid?