Children's book about a boy taken to a game-based afterlife, helped by a devil named Bub, short for Beelzebub

I remember reading this book over and over as a child. The protagonist is a bit of a troublemaker, and loves games and jokes. An accident happens (I don't remember what exactly) and he wakes up in a giant board game. Helping him along is a devil his age with horns who introduces himself as Bub, short for Beelzebub. I don't remember exactly how the game worked, but my memory of it is that they move along the edges of the board by rolls of the dice, card draws, or some combination of the two, with obstacles in the game manifesting as actual obstacles. I don't remember if the boy was in any danger from the obstacles, but he seemed pretty carefree about the experience. Near the end of the book, he succeeds in reaching the goal of the board, only to find out that it loops back around, with Bub telling him he's free to just keep playing the game forever. The protagonist is tempted, but gets cold feet, imagining never seeing his family ever again. When he decides to instead go home, Bub sheds his horns and reveals his wings and halo, him actually being the protagonist's guardian angel, who was hoping to get him to turn his life around in this near-death experience.

I believe the cover showed the board game in the background, the protagonist falling toward the board, and Bub looking on with amusement. I think Bub was wearing a beanie with his horns sticking through.

I found the book after a bit of Googling. It's The Big Joke Game by Steve Corbett. 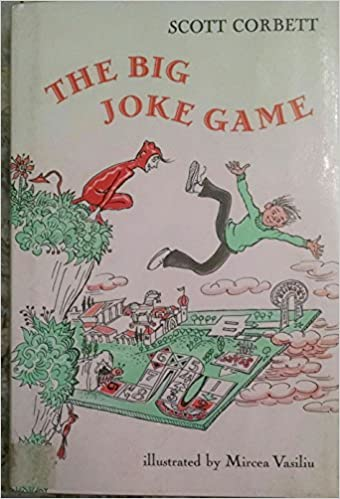 A young boy who loves practical jokes and games finds himself in the strange land of Limbo where the only way out is to play a complicated game.

This review has a few more details:

Ozzie is a child obsessed with two things -- jokes and games. His love for the two get him into so much trouble that he winds up faced with the prospect of military school, and decides to run away. A fall from a trellis, however, sends him to limbo where he meets his guardian devil, Bub, who's been keeping an eye on him. He's only got one shot to go back to Earth -- he's got to play, and win, The Big Joke Game.

I was wrong about what Bub was wearing on the cover, but the devil suit looks right now that I'm looking at it.

There's a more detailed review here, including mentioning that Bub introduces himself to Ozzie as his "guardian devil", since Ozzie is too mischievous a person to have a "guardian angel" (although it turns out he is Ozzie's guardian angel in disguise).

12
Children's book about a boy making a deal with a demonic piece of software
12
Old short story about a comedian who gets deadly jokes from the Devil (I think)
14
Novel about a boy who gets taken to an island by a robot, the boy can control machines
7
Looking for surrealist/ridicule book about a boy with a wingsuit
6
Book Identification - Children's sci-fi book about videogame aliens
8
Children's fiction book about the multiverse
7
Children's Book - Boy Develops Psychic Powers After Falling in Pond Sludge