This one is easy as the movie is renowned in its genre but the title escapes my memory.

I'm looking for a horror movie of the 70s, probably Italian, certainly European: a group of people, probably castaways, are on a deserted tropical island.

Troubles start when the wreck of a ship surfaces: it held the corpses of WW2 German soldiers who had been reanimated through superscientific means and turned into unkillable killing machines.
They all wore desert glasses implanted and tearing those away was the only way to kill them.
I seem to remember that all the characters die, as it needs to be in a proper horror movie.

An emblematic scene is when these undead supersoldiers come to life: you see the calm, flat surface of the ocean, the ship's wreck in the background and then all of a sudden several soldiers emerge, as though they were lying down under the water and then bent over their upper bodies 90°.

I've seen this movie several times on TV in the 80s and 90s, then I gave up on TV and haven't seen it anymore I also used to remember the title but now I've forgot it. Can you help me?

Sounds a lot like Shock Waves from 1977. It is set on an island and has Nazi Zombies. I remember the scene you mentioned about the soldiers lying supine in the water, then rising up.

Visitors to a remote island discover that a reclusive Nazi commandant has been breeding a group of Zombie soldiers. 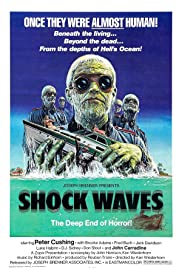 4
Scientific Horror Movie from the late 80's early 90's
9
Movie about a diver that finds and raises creature after being attacked in the ocean
11
2010s (?) movie, possibly German, where everyone is hiding from sunlight
6
1960s Sci-Fi/Horror Movie ID from Dramatic Final Scene
4
German horror movie with a surgeon and interns performing surgeries on themselves
6
Soviet Sci-Fi movie from the '60s(?)/'70s(?)
4
Name of the ghost horror movie?